After a short drive from the hotel, Lindsey dropped me off at the parking garage transition area in plenty of time for me to get the bike ready and get in a bit of a warm up. It was overcast and the forecast called for rain on and off throughout the day so it was actually nice to have a covered transition area. Nothing exciting during warm up... I got the bike all set and I was ready to get the party started!

Like last year, the pros got to dive into the river so here we are, awaiting the start: 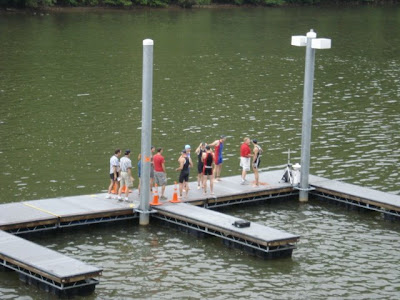 Not having been a swimmer growing up, I'm not exactly the best diver but I did what I could. We were off and right away I was caught in between some people when I noticed a break opening up. I tried to pass the two guys I was swimming behind in an attempt to catch the guys up ahead, but to no avail. So I ended up swimming the rest of the way in open water while pulling 3 guys along. Awesome.

Out of the water I was a little upset that I had missed the first two guys and then had to pull the second pack the whole way but I'm pretty sure we would've swam slower had I not been in front, so sometimes that's just the way it goes.

Once I was out on the bike the guys I pulled through the water (David Thompson, Daniel B., and Chris Bagg) immediately left me at the start of the ride. Coming to the first out and back, Andrew Yoder was way out ahead but I just tried to settle into my pace and ride with a nice consistent effort. As if I didnt already dislike biking, the conditions didnt help any as the roads were littered with obtrusions and it was raining and a bit chilly. Anyway, the rest of the ride was more or less uneventful other than the dodging of potholes and occasional downpours. The bike course was two loops and I did manage to negative split, finishing my second lap faster than my first, so I was feeling pretty good coming into the run.

As I entered transition, I noticed only four bikes on the racks. Apparently Andrew Yoder had gone down in a corner, moving me up a spot. So just like last year, I was starting the run in 5th which I was pretty happy about because the prize money went 5 deep and I was, as usual, pretty confident no one would be catching me. 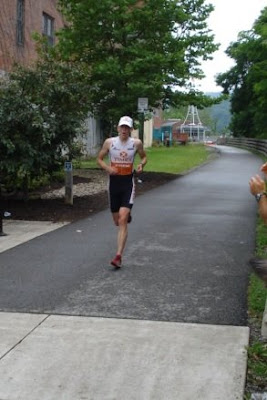 I set out on the run and was feeling awesome which just reaffirmed me belief that the ART has really helped. Within the first mile I got my first split from Lindsey, "3:30 to 4th!!" she informed me. The next time I saw her, only a few miles later, the gap was down to 1:30. I moved into 4th around mile 6 and was still feeling great, moving fast but still under control. Starting the second lap blisters started mounting and the HEED they were serving was not sitting well in my stomach but other than that my legs felt great so I kept clicking off the miles. Finally between mile 9 and 10 I passed another guy, moving into 3rd. 1st and 2nd were way ahead and both of them were moving pretty good so I just kept up my pace and was content to cruise on home.

I was still feeling fine until about half a mile to go when I had a blister under the ball on my left foot pop. I had plenty of other blisters all over my feet but this particular one was where I had had another blister which had popped in Kansas. So basically there were probably 3-5 layers of skin removed which made it VERY painful to put any kind of pressure on it all. Luckily though I was only about half a mile from the finish so I crossed the line as quickly as possible and proceeded to go directly to the medical tent where I was cleaned up and taped up.

Although there was a great spread which included trail mix, watermelon, soda, pasta with marinara sauce, huge cookies, and other goodies which I'm likely forgetting, Lindsey and I had to dart back to the hotel to check out. After that it was back to transition to pack up the bike. Here we are in the middle of packing my bike in the transition area parking garage. Doesnt Lindsey look good in orange?? 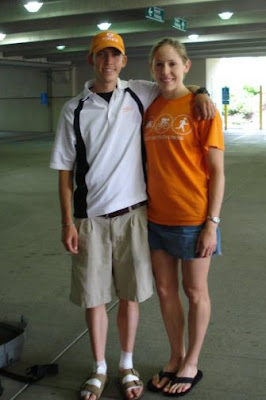 After a quick packing, we were on the road back to our Nation's Capitol where we had reservations at a fancy restaurant, Central. (BTW, thats sen-trahl not sen-truhl...) The company was great and dinner lived up to the hype. It was a nice evening in DC: 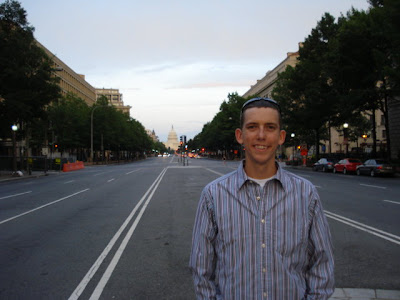 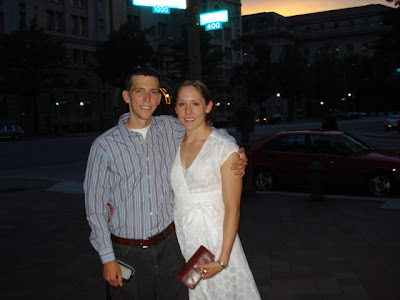 but unfortunately due to my early flight in the morning and the multiple flesh wounds which had devoured my feet, we didnt hang around the ciy much.

All in all the trip was a lot of fun and even a bit rewarding as I made some money on the deal.

Results can be found here: http://www.hfpracing.com/results/results.php?eventid=38&raceid=94

I also love the fact that when I look at the last few pictures John Paul Young comes on in the background... neat trick. :)

Congrats on another great race, Hodges!