..........Picking up from yesterday, pretty soon after the Rock 'N RollMan Half, George and I were back in the Ford Edge heading north on I-75 towards Chattanooga before heading west on I-24 towards Nashville.  We arrived just in time for me to be introduced as a Celebrity Big Kid during the packet pick up for the race the following morning.

I awoke Sunday morning to some sore legs, but was ready for a fun day with the kids. Timex Teammate Bruce Gennari was there as a Big Kid as well and we started the day off by helping the not-so-big kids set up their transition areas, which was pretty entertaining because with kids from ages 6 through 15, some of the bikes didnt have either tire on the ground and were instead just hanging from the racks.  Additionally about half of the bikes were pink with white seats so it was a was pretty funny sight; certainly not the not your typical transition area!

The kids started according to their age group, with the 6-7 yr olds first, and 8-9 yr olds second.  I was helping at the swim start and then moved to the transition area, where it was great to see the unabashed excitement on their faces.  It was also pretty cool to see the competitiveness; some of these kids were really getting after it!

After the 8-9 yr olds went off, the Big Kids had to race. My feet torn up and my left glut/piriformis was still really tight courtesy of the half the day before, but how could I not race for the kids??  Thankfully I managed to pull out the victory while rocking the speedo the whole way. 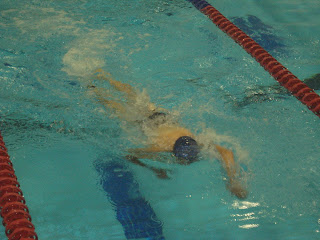 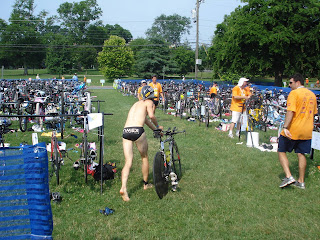 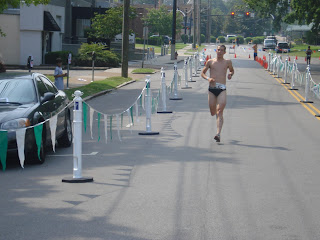 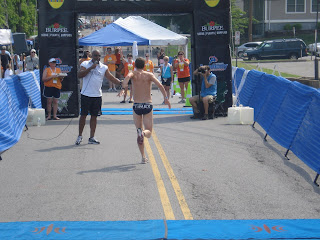 After the "older" kids had their races, it was time for everyone's favorite part of the day... the awards!  I say this sarcastically as at most races, the only people who stick around are the people who are receiving awards and even they usually arent all that excited to be there, and then jet as soon as their names are called.  Not so with the kids!  They were genuinely thrilled to get to go up on stage and receive their awards.  In addition to trophies, Bruce and I were placing Timex hats on each of the award winner's heads, which really got them pumped!

All in all, I thought it was a really successful event.  Almost 300 kids raced and I didnt see a single one disappointed. Rounding out the day, Bruce, George, and I went to lunch at Chipotle... cant beat that!
Posted by Andrew at 9:59 AM

Hey Andrew. I coach a running club in Nashville. Thanks for coming out for the Vandy Kids Triathlon! Our running club had about 15 kids under 11 competing that day. They did another one a couple weeks later and they can hardly wait for the next one in August. I was wondering if you had any coaching suggestions for me. I'm a runner myself, so this is a bit out my league. I'd love an book or website suggestions you might have...and if you're ever back in Nashville we'd love to have you visit with the kids!
Jennifer Gentry
Coach of Nashville Road Runners

For a run training book, I'd definitely recommend "Daniels Running Formula" by Dr. Jack Daniels. Daniels lays out periodized training plans for all distances and for athletes from all experience levels. The plans are designed from his years of experience as an exercise physiologist and coach, so he really knows what he is talking about.

I'm not sure on the dates yet, but I should be through Nashville a few more times this summer and would love to come talk to the kids. Just shoot me an email and we'll work something out.

I had to laugh at my 8 year old daughter after we read the blog post. She competed in the tri (came in 5th for her age group and her first tri ever!) She looked at your picture and said, "Oh, I remember him, he unbuckled his helmet before he got into the transition area". Thanks for being a BIG KID triathlete and an astronaut!

It was my pleasure! Really, I think its great to see 8 year olds doing anything outside. And, sorry to disappoint but I dont fly in rockets, I just figure out how to build them. ;)