Ahh yes, nothing like a little college football talk to get you through the dog days of summer. Although the Tour has been incredibly exciting, it still doesnt hold a straw to the excitement of the college football season. The passion, especially here in the south, is simply unreal.

This year the media throng culminated in Birmingham for the annual SEC Media Days where columnists from across the country get to drill SEC coaches and players. One of the the main attractions this year was last year's Heisman Trophy winner and all around good guy, Tim Tebow. Seriously, is there anything this guy cant do? Here is his recent schedule, taken from this article in the Atlanta Journal-Constitution. In addition, he is working on a cure for cancer and solutions for the world food and energy crises, so we'll let you know when he finishes those up.

TEBOW STAYS ON THE RUN

Since the end of Florida's 2007 regular season and the beginning of preseason practice in August, Heisman Trophy winner Tim Tebow will have traveled more than 15,000 miles to be honored by 15 different organizations in nine different states. He has also made three mission trips. Here are just the highlights of his travel schedule this year:

Jan. 1: Plays against Michigan in the Capital One Bowl in Orlando.

Jan. 19: Honored at halftime of the Florida-Kentucky men's basketball game.

March 8-16: Spends his Spring Break in the Philippines doing missionary work. Does minor surgical procedures in the local clinic.

April 1: Flies to New York and back on the same day to accept the Sullivan Award.

April 12: Spring practice concludes with Blue and Orange game. ESPN's College Game Day visits and Tebow is honored with a sign on the façade of Ben Hill Griffin Stadium.

April 13: Organizes a powder puff football league from Florida's sororities in that raises almost $10,000 for orphans around the world.

April 24: On a day with no classes and no final exams, Tebow joins UF President Bernie Machen on a visit to the state Capitol in Tallahassee. They meet with governor Charlie Crist and were recognized on both the Senate and House floors.

May 1: Speaks at a banquet for the North Florida Fellowship of Christian Athletes.

May 2: He spends the day with his family as his brother, Peter, graduates from high school.

May 4-11: Visits Croatia with his family on a mission trip.

May 28: Spoke to a youth rally of over 2,500 in Starke, Fla. Was invited by the First Baptist Church of Starke.

June 21-28: On break between summer school sessions, Tebow goes to Thailand on a mission trip,

July 11: Flies to Atlanta to see his sister and attends a Kenny Chesney concert the next day.

July 14-17: Travels to Los Angeles for the ESPY Awards. 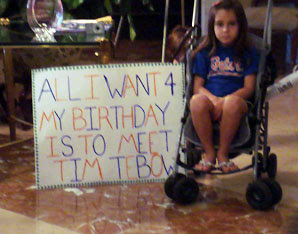