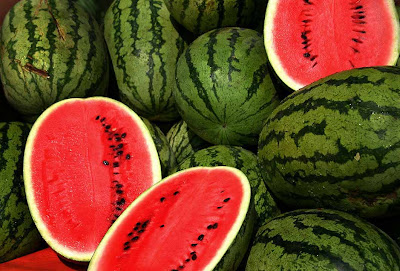 Its always fun when you glance at the temperature on your desktop before heading out for a ride and it reads "104F". And lets not kid ourselves... this is no "dry heat." Regardless of the heat, it was a pretty nice ride last night out on the Arsenal with lots of wildlife. I hit a couple of large bugs which were quite annoying but I also saw what appeared to be either a fox or coyote. I'm not much of a biologist so I'll have to ask around about the natural predators out here.

After the ride though I had some cool, ripe, sweet watermelon waiting for me. Loaded with antioxidants in addition to a high water content and high GI value, watermelon is the perfect post workout snack. It is also incredibly delicious and refreshing when its hot out. Best of all, they are in season now and very reasonably priced, so load up!
Posted by Andrew at 9:06 AM