While I'm certainly not one for living in the past, I do think it is a good idea to reflect on the past periodically to understand what worked and what didnt so that improvements can be made going forward. So, being the end of the year, now is as good a time as any!

Before getting started, as you'll recall, 2014 marked a pretty big change with respect to racing, as I decided not to renew my USAT Elite license. Basically, I wanted to take a step back from training and racing in order to let other aspects of my life take up more of the extra time. Looking back, it appears I achieved that on the training front, but still raced a ton! So, here is where we stand:

The season started off a little slow at Little Rock due to a late start after the Rocket City Marathon at the end of 2013. But with my focus firmly set on Gulf Coast, I had, in retrospect, a string of pretty decent races. The Heel and Crank / Bridge Street Half double was tortuous, and probably not the best idea for being competitive for the rest of the season, but it was a cool challenge at the time, and I got a mug out of it! I was pleasantly surprised with my times at the HTC Scholarship 8k and Cookie Dash 5k, and then really pleased with my performance at Gulf Coast. That was really the one race I was targeting in the spring, so it was nice to have a really solid performance there and win by almost 10 minutes despite a cancelled swim (which was a HUGE bummer!) Sure, my performance wasn't as great as my previous best 70.3 performances, but it was still good enough for a solid 'W'. 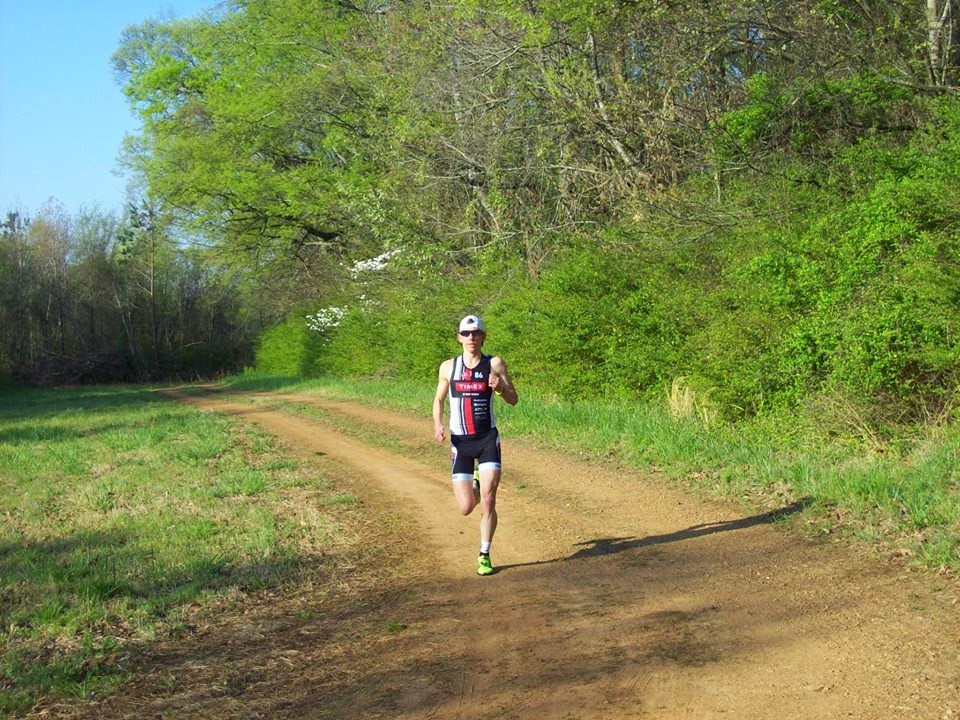 Halfway through Run #2 in the Heel & Crank Duathlon. And yes - there is no one else in sight.

From there, the summer was unplanned, but I ended up still racing quite a bit (but training even less) Mach Tenn was a race I had never done before (no prize money) but signed up on a whim, had an awesome race, and won. In addition to being an awesome distance (800m/16mi/4mi), the post race food was top notch! Fresh corn cakes and beans, beer, and all the other standard post race fair. And, it was just a few miles from Lynchburg, TN, and Jack Daniels' distillery, so there was a little bonus trip on the way home. 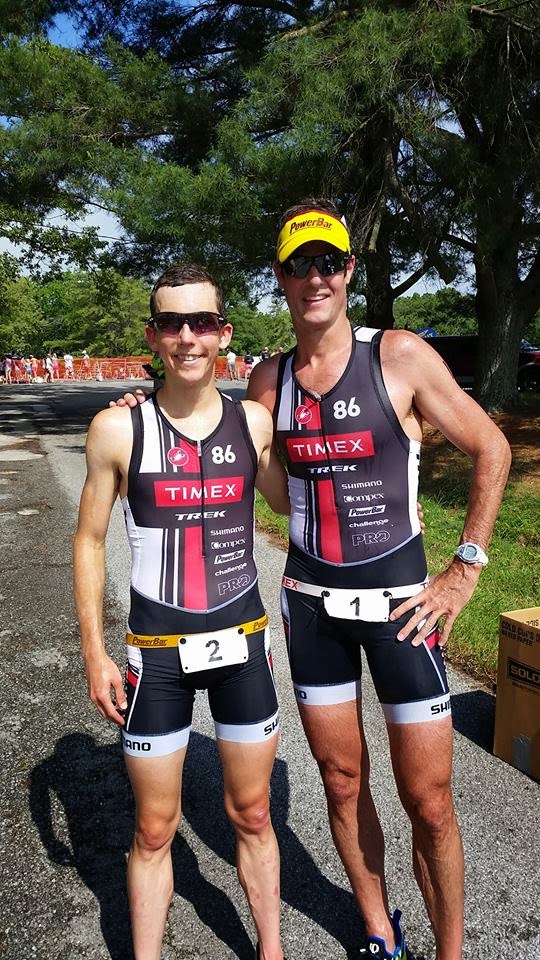 After Mach Tenn it was time for the local trio of races - Racing Rivals, Huntsville Sprint, and Rocketman. I was hesitant about Rocketman because it wasnt in my (tentative) plan at the beginning of the season, but when my friend from college told me he had registered, I knew I had to join him. In the end it went really well and I was able to put together a strong swim (thanks Bruce!) and strong bike (thanks Trek!) to mask an astonishingly mediocre run and hold on for a healthy win over a pretty strong field. 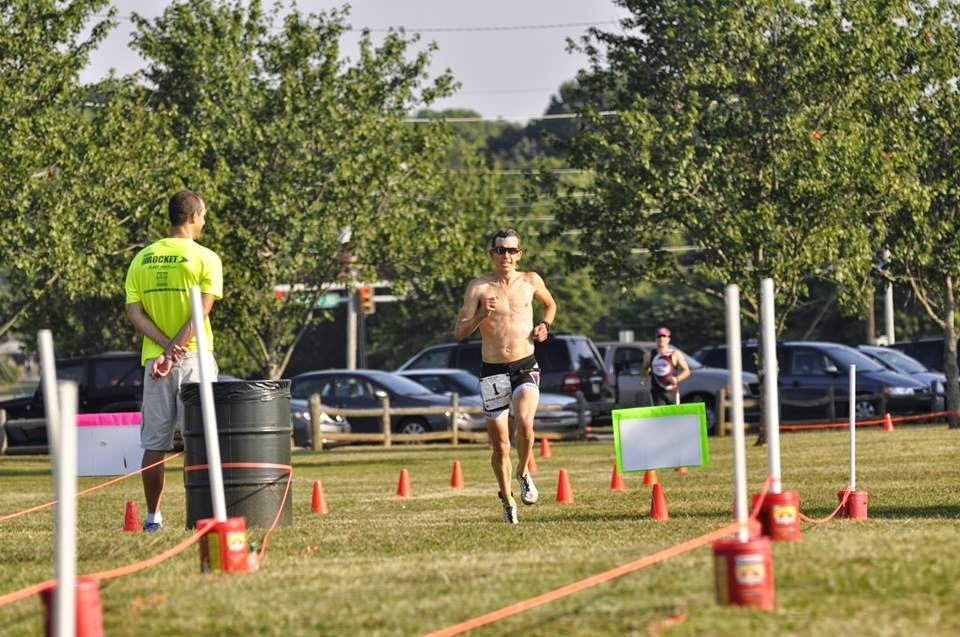 Coming in for the 'W' at the Huntsville Sprint Triathlon

From there all sights were set on Swim Hobbs Island, a 5 mile swim in the Tennessee River around, you guessed it, Hobbs Island. This was another race I was peer pressured into (thanks Suz and Suz!). Thankfully the competition for this first year race wasn't epic so I was able to come away with a pretty easy win. Really though, it was cool to swim 5 miles! Not having swum as a kid, that was definitely the furthest I had swum in one workout. I'm not sure I'd want to go much further, but I do really enjoy open water swimming. 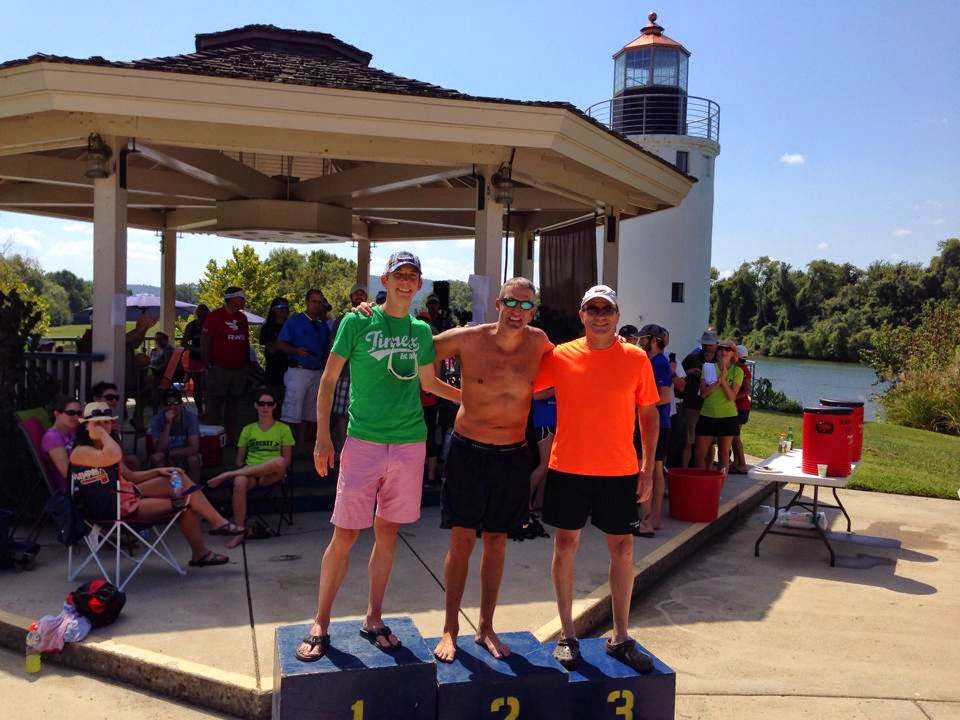 The podium at Swim Hobbs Island. Yeah, I won a swimming race

After the swim I tried to turn things right around and get in shape for the fall's annual running races. This, unfortunately, is where things started to unravel. I managed to pull out a decent performance in the Army Ten Miler and continued pressing, hoping I could get (back) into shape for the Rocket City Marathon in December. However, by late October my hamstring had had enough and any hopes of a fast run at RCM were out of the picture. 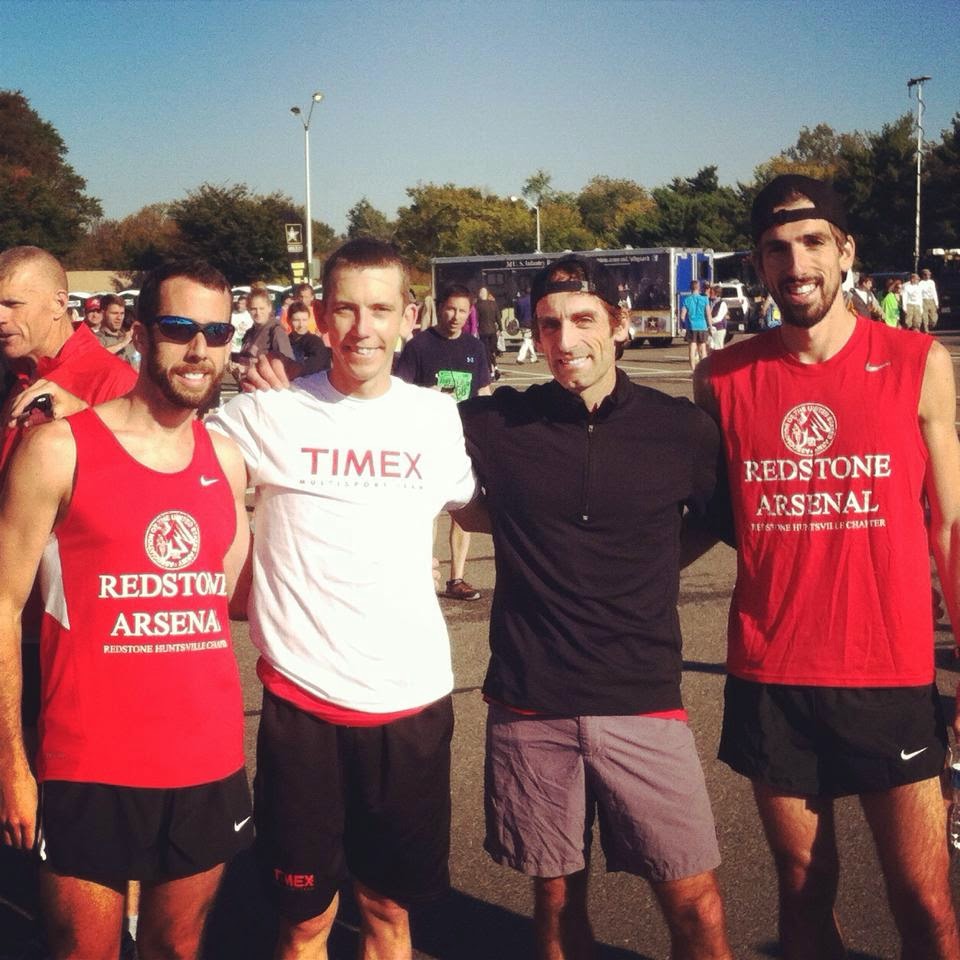 Looking back, my training was fairly consistent in the spring, but horribly inconsistent over the summer. That, combined with my frequent racing, meant I was toasted to a crisp by the fall. I was able to fake my way through late summer races with good swims and bikes, but it was apparent my run was just not up to par and just hanging by a thread. The nail in the marathon's coffin, then, were Rocketman and Swim Hobbs Island - training for these caused my RCM training to be delayed, then rushed, then ultimately doomed. Retrospectively though, that was fine, because Rocketman and Swim Hobbs were both awesome events, and there are plenty of marathons ahead... like Boston! And, "other life stuff" is going really well, so mission accomplished.

So yeah, I'm registered for Boston 2015 and look forward to the experience. I may be getting too old to set any PRs, but if I can stay healthy I'm still hoping to run reasonably well. From there I should have plenty to prep for the annual series of late summer and fall races. Should be fun!

But back to lessons learned for this year:

1. Training for a marathon swim and marathon run require very different types of workouts. Do not try to attempt both at the same time.

2. You can fake swim and bike fitness much longer than you can fake running fitness.

3. Racing is fun, but much less so when you haven't been training. Make sure to adjust expectations accordingly.