The weekend before last I made a few fairly significant changes to the bike position, mainly to ease some pressure off of my piriformis but also to get into what is hopefully a bit more aerodynamic position. Changes include:
1. A new adjustable stem which allowed me to lower the front end over 1cm
2. Flipping around the seat post to the "forward" position in addition to moving the seat forward on the rails.
3. New fizik Arione TRI2 Wing Flex saddle. Although admittedly I bought this saddle solely due to their recent awesome add campaign, I have actually really enjoyed riding it and it has been a welcome upgrade from my previous saddle.
4. I switched from the T2+ Cobra bars to the Sonic CSX bars. These have taken a little getting used to but they are SO much cleaner and more stable than the Cobras.
5. New bar tape. A necessity when you get new aerobars.

On to the pics where its out with the old, Euro-pro bike position: 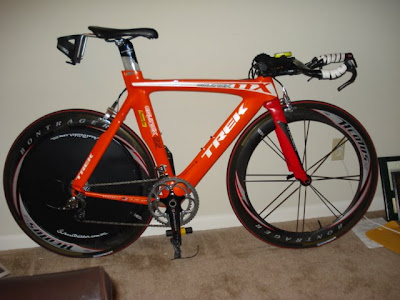 And in with the new, tri geek position: 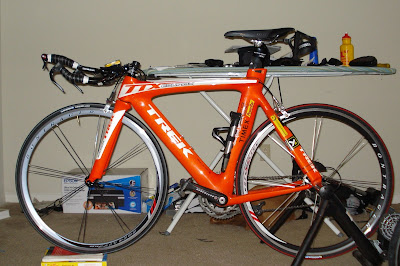 So far things have been good with respect to the butt but the new position will certainly take a little while to get used to. Early returns (from 2x20 workouts) indicate a loss of around 10W @ FTP but I'm fairly confident I'll be able to make that up relatively quickly.
Posted by Andrew at 8:26 AM

It looks like you got a new paint job, too. Or, perhaps the bike is happier with your new setup and is glowing a nicer orange color.

Anyway, the hard work will pay off. I know how time consuming it is to make adjustments to the bike. That's why I've delayed adding an extra water bottler holder to my bike for a solid week. who has the time?!?

your bike is baller. i'm jealous.
Also, some Timex peeps were at Rhode Island 70.3 and did really well. You should have come! I did a 5:34 so I'm pretty happy with that as a first time race.