I arrived at the race site without any hassle and after parking the car I started getting my bike ready. I then headed over to transition and went through the usual prerace nonsense. In transition I got to meet Jeremy Sipos, a fellow member of the Posse who lives in the ATL. Soon enough it was off to the swim start, which was about a quarter mile from transition.

After pulling on the wetsuit I only got to warmup for about 5 minutes in the water before we were called out. While I would’ve liked to have loosened up a bit more I wasn’t too worried because we were allowed to wear wetsuits even though the water was reported to be a cozy 73 degrees. Regardless, after a prayer and the national anthem, the largest open field in the (short) history of the race was back into the water for an air horn start.

The lake was nice and calm and after a few minutes I settled into a group with two other guys. There was another guy out front so we were 2-3-4. I was sitting in third (2nd in our group) and about a quarter of the way through the swim the guy in front of me started veering off course a bit so I cut back to the inside. He mustve realized his error because soon enough he came back towards me and I ended up pulling my two swimming partners the rest of the way. Fine by me as I was in a good rhythm; just trying to go as fast as possible without overheating in the wetsuit. Finishing up the swim I could tell the first place guy wasn’t too far ahead so I was hoping he’d come back during the run, if not on the bike.

I jumped onto the bike and I was ready to rock and roll. In order to not have a repeat of Almere, I was determined to not to go out too hard and I also wanted to make sure to eat enough. Not going out too hard was simply solved by trying for the same power as Almere as I was fine through 56 miles there (just couldnt quite make it 75...). So once I settled into my targeted power range I braced myself for what was sure to be a number of people coming past me on the bike because, well, that’s what usually happens to me in races.

However, a funny thing happened… no one was coming. On the other hand, I was actually catching the guy ahead of me… what a concept! About 12 or so miles in I caught him and was feeling good so proceeded to go right by him into the lead. “He must be a swimmer,” I thought and after passing him I was still ready for others to start coming by. I continued to lead up until the aid station at mile 30 when while I was grabbing a bottle of Gatorade, former #1 passed me to retake the lead. I let him lead for about 5 minutes then repassed him on a downhill as I was determined to keep the speed up and we just weren’t going fast enough with him in front.

So the miles ticked by and I kept riding my race, waiting for the others to come. 30, 35, 40 miles down. At this point, I was still feeling great. Additionally, I knew that time was running out on the cyclists. If someone else wanted to win the race, he’d have to catch me pretty soon or be ready to run really fast. 45, 50 miles down. By now I was pretty excited and I start kicking it in, just so I could win ST’s all important “race to T2.” The best part was that the power was still there and I finished strong. 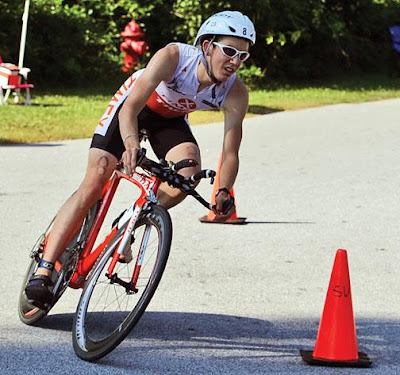 Heading out on the run I saw my pursuers and realized they weren’t far behind. However, I also knew that as long as I didn't totally blow up, I should have be able to hold everyone off. I felt good and came through the first mile in 5:42. The run course is two loops and I just told myself to just take it nice and easy on the first, then if I needed to I could always pick it up on the second. The miles started slowly clicking away (2= 5:48, 3 = 5:40) and I just sang along to the song(s) in my head and tried to stay relaxed. Finishing up the first loop, I got a huge boost from the crowd and headed out onto the second. There were some hilly parts around the turnaround with uneven footing but other than that I was feeling fine. It was nice to see the other competitors out on the course as well. Soon I arrived at mile 11 (11 = 5:52) which sat near the top of a hill and was a place that I told myself I just needed to get to as it would me mostly downhill from there. Still feeling good, I started to open it up a bit. I turned back into the park for the last time and it was a thrill running through the crowd again. 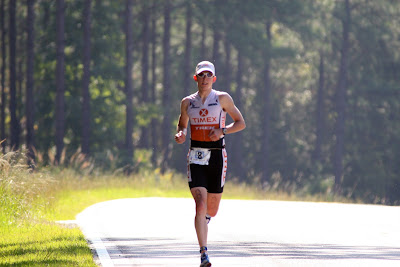 At this point I was still feeling great, but was ready to be done. However, the finish for this race is a bit evil. After running by the lake, participants had to trek up an ~13% grade hill. It was only about 20m long, but that’s an eternity at the end of the race. As I begin the ascent, the announcer starts screaming, “Come on, if you sprint you can break 4 hours!” 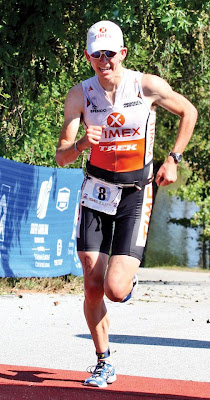 Do I want to sprint? Hell no. But he totally just called me out so I oblige, huff up the hill, and finish in 3:59:53. I’m told that it is a course record, so that was pretty cool. 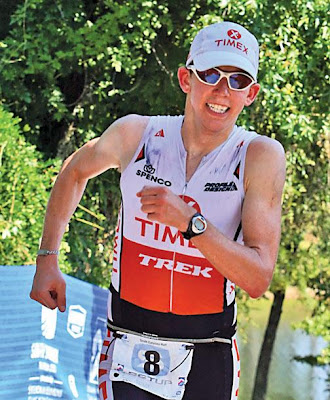 The post race spread was included a nice meal of hamburger, grilled chicken, pasta salad, and a brownie in addition to Coca Cola and lemonade. There was also Bruster’s Ice Cream which, unfortunately, was not free. However, I had no problem forking over $5 for a double scoop waffle cone of sheer goodness.

All in all I was really pleased with the race. It certainly helps get over the poor performance in Almere and gives me confidence for Clearwater. For now though, its back to work!
Posted by Andrew at 8:09 PM

Congrats! That performance was HUGE!

I'll be at Clearwater cheering on the posse (you and the sandbaggers). Can't wait to meet you!

Dude, you clobbered the field! Greenwood was my first Olympic years ago. I remember the bike course was very tough. Great work!

Yay yay yay!!! I'm so proud of ya! All of that hard work is paying off!

"If you aren't working hard everyday, somewhere, someone else is, and when they meet you, they will beat you."

nice one man! good for you! glad to see things clicking on the bike as well.