I had a pretty nice little Saturday planned so I figured I'd take the camera along for a little documentation.... 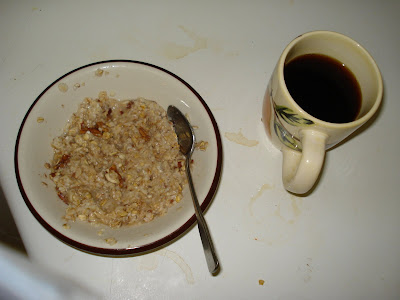 4:40 AM- Breakfast time. Maple Brown Sugar Simple Harvest Oatmeal with a cup of coffee. A nice start to what is looking to be a long day. After breakfast #1, I make breakfast #2 for after the swim. 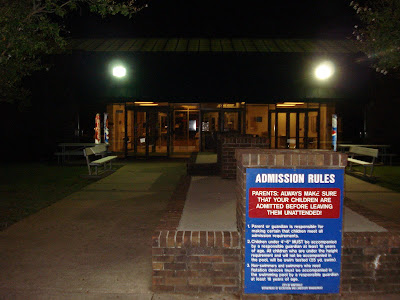 5:10 AM- Arrive at the pool, the Brahan Spring Natatorium, for a nice 4600 yd swim. I'm in the water by 5:20 and most of the other Masters swimmers are in the pool by 5:30. The Zn4, Zn3 main set goes well. As I start the second part of the workout, the kids start showing up around as the sun begins to rise.

6:30 AM- Workout #1 is history! I'm taking off just in time as the kids, having finished up their dryland exercises, are hopping in the pool. 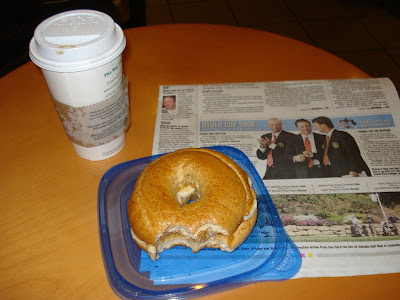 6:58 AM- A little stop off at the 'bucks for breakfast #2, peanut butter and banana on a bagel with honey and a triple-grande-no whip-mocha. Yummy.

7:33 AM- Arrive at Madison County High School, the start of the SCCC's (Spring City Cycling Club) AYCE Century. Registration is seemless as I pick my registration and get changed into my cycling clothes. Its raining a bit, so no pictures of the start. Hopefully things will warm up because 5h in the saddle will be a lot less fun if its cold and raining.

8:52 AM- At this point I'm just sitting in the pack and finally getting my legs under me after the swim. Its still overcast but at least there isn't any precipitation. Also, the temperature isnt too bad, probably high 60s or low 70s, but I'm glad I went with the vest.

10:10 AM- There are a few short hills and then one longer one which finally create some separation. Four of us get off the front and ride together until... 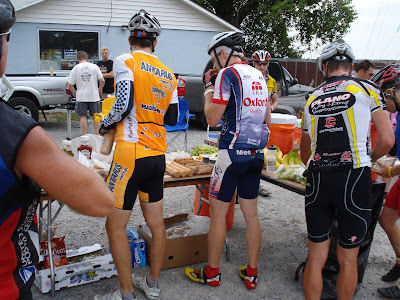 10:23 AM- Rest stop #2. After rolling through the first stop, we decide to take a break here to grab some food and drink and use the facilities. I snag an Oatmeal Cream Pie, refill the water bottles, and am ready to go. The front group (about 15-20 riders) had regrouped at the stop and we all depart together.

10:39 AM- After getting back up to speed I'm feeling pretty good. We hit some rollers then a couple short, steep hills, then finally a solid ~3-4min long climb during which I'm wishing I had a smaller gear. It appears others do, but I'm stuck in the 39x25. After cresting the hill, the group is now down to four.

11:43 AM- The four of us work together, winding our way through the southern Tennessee/northern Alabama countryside. We dodge dogs, cruise by cotton fields, and focus on getting to the finish.

I figure I'm the second strongest guy in the group, but each uphill begins to become more and more painful. I'm just thinking about getting this nonsense over with so that I can start watching football.

12:31 AM- We take another quick stop. At this point we have only about 13 miles to go but one guy is running low on fluids and no one protests the stop. I wouldve been fine to keep going but also didnt want to lose the company (and draft) of the other guys.

12:47 AM- I take what I think will be one of my last pulls on what I expect to be a flat, straight shot home.

12:47:30 AM- To my surpise, there is a sharp right turn and a short but very steep uphill. Apparently a couple of the guys knew this was coming as they were in their small rings and were ready to sprint up the hill after the turn. I, OTOH, was not. Two of the guys got away while I just tried to finish stong with the forth guy on my wheel. 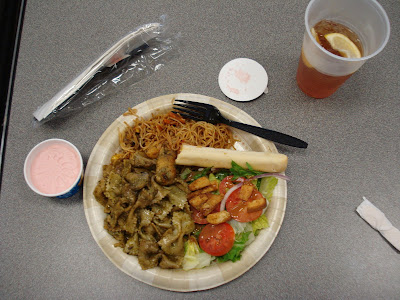 1:06 PM- I head to my car to pull off the bibs and put up the bike. Then its over to the school's cafeteria for lunch #1. The century was sponsored by Nothing But Noodles, so we were treated to two pasta choices and a salad in addition to drinks and some Purity ice cream. 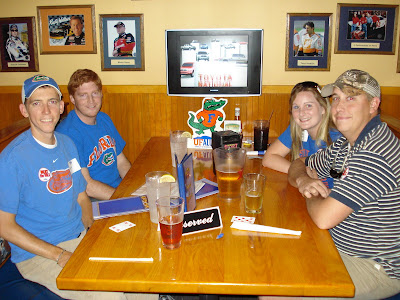 2:41 PM- After rushing home to get cleaned up, I arrive at Indigo Joe's to watch the Gator's kick some Volunteer butt with Rusty, Jenn, and Daniel. The game has just started but already the Gators are up 7-0!

3:55 PM- With the Gators comfortably in control, I go with the ahi tuna sandwanch, cooked rare, and another brew. It's quite tasty. 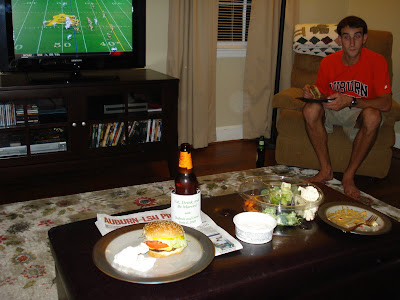 8:18 PM- At half time David fires up the grill and I get caught up on the TIVoedGeorgia-ASU game. Soon we're enjoying grilled ground beef although Senor Riddle is still worried about the game.

9:49 PM- After being in the lead for the better part of the second half, Auburn plays to conservatively on offense in the 4th quarter and LSU gets the ball back with a little over 4 minutes to play. In addition to having plenty of time on the clock, LSU has good field position (due to a bad Auburn punt) and only needs a field goal for the go-ahead score.

10:13 PM- LSU gets the touchdown and Auburn's fate is all but sealed. I am disappointed, but everyone else at the party is downright dejected as they, being Auburn fans, had a little more emotionally invested than I did.

Century = Lunch on the bike! Good report. Rudy won the SML Oly this weekend by about 5 minutes! Usual suspects raced - Rick, Drew and Keith, Cal B, Cathy, Theresa, and I.