After a quick breakfast, Kevin, Chris, and I were off to catch the USAT arranged shuttle from our condo to the race site. It departed at 6AM and after a 40 minute ride and short walk we were at transition at around 6:45 with the race scheduled to start at 8:30. It was a beautiful morning and we were all ready to get the race underway. 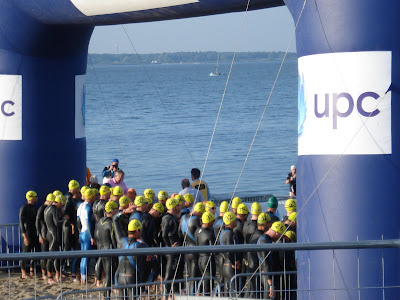 Here we are lined up and ready to rock and roll...
After getting my transition area in order I headed for the beach where I proceeded to pull on the wetsuit before heading to the lake for a quick warm up. At about 8:15 the 50 or so male elites were corralled to the starting area where the top 10 were introduced. At this point I was getting a bit nervous but at the same time I was excited and ready to attack the race. The horn sounded, indicating the start and the typical madness ensued. After the usually rough first 5 minutes, things appeared to be settling down. But in fact they were not. Heading into the first buoy there was still a huge group and I was just trying to get some position and keep my head above water. After the turn we immediately were greeted with a nice current/chop which we were now swimming into. This bunched things up even more and the waves only exacerbated the bludgeoning I was already taking from other competitors.

The swim course, shown above, consisted of one small loop and another big loop with the small loop supposedly about 1200m and the big one about 2800m for a total of 4km. So after the first turn we were on the second leg of the first loop and it seemed to take forever... much longer than it took the day before. Once we got through that turn I decided I needed to somehow get out of the group and figure out where I was in the context of the race. About half way to shore I noticed another group a bit further up ahead and decided I’d try to finish the first loop strong and bridge the gap on the run on the beach before the start of the second loop. I put in a nice surge and did just that, catching the 4 guys ahead of me.

At this point I was excited I had caught this pack and hoped the race would now string out but I still wasn’t sure if I was now in the front of the race or just the front of the chase pack. After catching them I felt like our pace slowed considerably but I knew we still had a long way to go and was worried about pushing too hard. Additionally, I tried to look up ahead and could not see anyone else so I figured I was in the front pack and that even if there were guys up ahead then it was only a handful of people.

Unfortunately our little group soon grew and heading into the first left turn on the second lap there was again a huge pack. Just like on the first loop I was getting shoved all over the place so I went to the front and tried to get things strung out a bit. Unfortunately due to the choppy weather this was a futile effort as much like riding into a headwind, it was much easier to swim in the group and take a beating than to swim out front into the waves and current. We finally made the last turn for home and I cruised in towards the front of what turned out to be the second pack. Looking back at the results, it appeared there was a group of 5 or 6 up the water but I couldn’t see them at all during the race. I came out in 1:05 for a long and tiring swim. I was more than happy to be done with it as my shoulders started tightening up with about 10 minutes to go. As it turned out, the leaders took about an hour so the swim was most likely 10-12 minutes long.

Because I came out of the water in a pack I headed out on the bike with some company. However the others immediately took off and it took me a while to get up to power. The swim had been rough and longer than I’m used to (1h05 compared to 0h25 for a 70.3) so I had to let them go. Once I settled in though I was feeling good and was determined to ride aggressively the rest of the way.

I was holding good wattage and feeling good through 40k when a few guys came up on me slowly. I decided to try to hang with them a while even though it meant pushing the envelope a bit. Paulo and I had discussed this before the race and I thought I had an outside shot of sneaking into the top ten with a solid ride and relatively normal run. Basically I was going for broke. 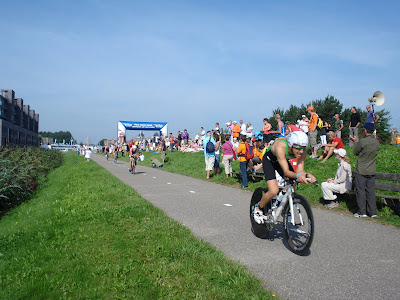 I'm the second guy in this picture and we're starting the second lap of the bike.

This worked great up until about 90 km when I lost contact with the group through a technical section of the course. Then at around 100 km the wheels started to come off and it was a real struggle to keep the pedals turning over. I made it back into transition and as usual was more than happy to be off my bike. 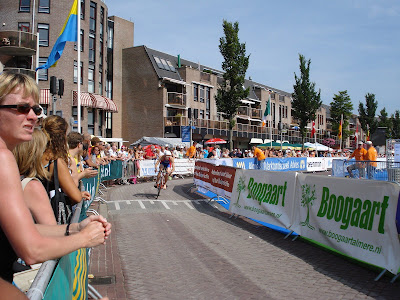 Finally done with the bike ride. Oh so sore and I have 30km to run. Not good. 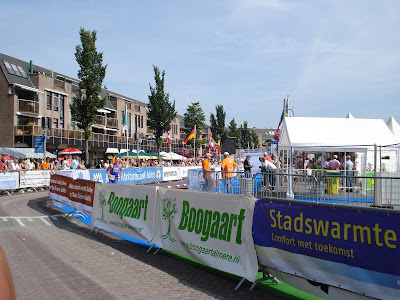 Heading out on the run...
Starting the run however, I felt significantly less than stellar. I had done hard rides in races in the past, most recently Florida 70.3, but this was worse. Nevertheless I jogged out of transition and just tried to get into a rhythm as quickly as possible. The first few kms were painful but eventually I started clicking off some 3:40 kms and I was looking forward to a solid run. Unfortunately though this was not to be the case. Very shortly thereafter things went south in a hurry and by 10k the wheels were falling off. I was running 4+ min kms and was ready to call it a day and pack it in. It was then that I told myself there was no way I was going to fly over to Europe and not finish so I decided to start walking through the aid stations and running in between. While this was certainly a blow to the ego, it was necessary at the time and really helped me get in some fluid and calories. I slogged through the rest of the run and finally crossed the finish line. 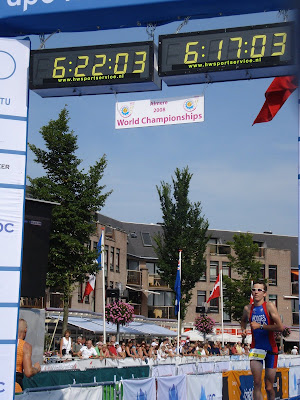 Struggling across the finish line. 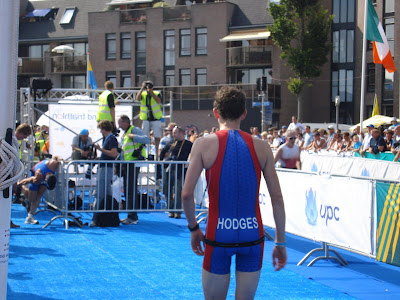 And a nice butt shot. I'm just glad I'm dont and still walking. A couple of moments later, I was laying down in the med tent.
While the result was not spectacular, it was a thrill to finish and I was of course extremely glad that I did stick it out rather than pack it in after the first lap. I headed straight for the med tent where I got to lay down and take some fluids. After 15-20 minutes of sipping a coke and some soup my lightheadedness began to subside and I was able walk and talk coherently. The post race spread was excellent and included (among other things) watermelon, pastries, and coffee. 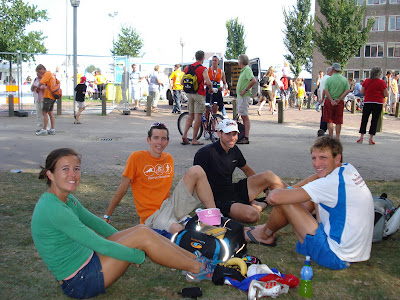 After recovering, eating some food, and showering, we enjoyed the weather and atmosphere a bit in Almere.
All in all while I wasnt particularly pleased with the result, I wasnt totally disappointed either. First of all I finished 24th in my first World Championship as an elite... not to shabby. Second, in retrospect, I realized that I hadnt had enough to eat or drink on the bike which was just stupid. The sports drink they provided was just awful so after I finished my 20 oz bottle of Powerbar Endurance I didnt have any more sports drink the rest of the day. That coupled with only about 40 oz of water and 5 Powerbar Gels simply wasnt enough. Luckily though I wont be racing in Europe again any time soon so I'll be glad to be back to good old Gatorade in the States.

Finally and more importantly though I knew I was taking a risk by pushing the envelope on the bike but I felt like I had to in order to give myself a chance at finishing in the top 10. In retrospect I likely couldve raced more conservatively and finished somewhere around 15th rather than 24th but I set out wanting to finish in the top 10 knowing very well that I was taking a risk and that there was a distinct possibility I would blow up. However, even though it didnt work out I learned where my limit was. And lets face it, if you never go over the edge, how do you know where the edge is? Now, do I think this is a smart way to race? No. In fact I would recommend against it for most people in most cases. However, sometimes you have to weigh the risk/reward and take some chances, especially when racing as a pro. This time it just didnt work out but I'm hoping the lessons learned here will pay off in Clearwater.

For the ITU summary of the race with results and pictures, go here.

For complete results from the race website, go here.
Posted by Andrew at 8:35 AM

"I'm the second guy in this picture and we're starting the second lap of the bike.", the first guy is Krep (Pedro Gomes), together with Sergio, they are the two best Portuguese LD athletes.
Just ask Paulo, he knows him quite well! ;-)

Sports drink really suck in several race in Europe, that apart you should come and race more often in Europe, it's for sure (at least) a good learning experience!

BTW, Congratulations. 25th in the first experience in the Elite level in a WC is for sure a great result.

Nice work Hodges....Ironman is not too far off ;)

Blake: I think if anything, this race reminded me why I DONT do IMs ;)

To solve the sports drink problem, you should check out a new device called "AquaJoe". It's a sports drink powder holder/dispenser for athletes. Ideal for situations where there is access to clean water.

Hey Andrew I just read your blog about Almere. I think you did great...25th and you still got to walk a few water stops. I give you alot of credit for putting it all out there! Its does suck when you get into T2 and you realize you probably went a little hrder than you should have...no getting it back sometimes!Sounds like a god experience though!