Sickness, Part 1: First it was a cold. I had all the usual symptoms but while they were certainly annoying, overall I didnt feel too terrible. However, after a couple of weeks of sore throat, congestion, cough, etc., I woke up to muscle soreness and a fever. This forced me to take a few days off but then a couple of weeks ago I thought I was finally getting over it. However, my congestion lingered and lingered and I was still feeling a bit sluggish. Additionally, key workouts were off. Finally, after stubbornly avoiding the doctor's office, I decided to head in to make sure there wasnt anything seriously wrong. He took some blood and gave me some antibotics and yesterday I got the results back of the blood work. As it turns out, in my doctors words, I've had a "mono-like virus which explains the tired feeling. Additionally it is common to get a baterial infection on top of these so go ahead and finish the antibiotics." Well... that explains that. This of course made me think of a passage from Once a Runner:

"On a rainy day in November he was so sick with the flu that his wife, Jeannie, felt constrained to stay home from work to look after him. He threw up regularly and he diarrhea so badly his stomach muscles began cramping. Nonetheless, he arose and ran two eerie miles at a stumbling pace, pale and shivering the whole way. Again in the afternoon he repeated the process, this time nearly fainting as he staggered back into the apartment."

Sickness, Part 2 is a totally different kind of sickness... one that really only requires one word... DAMN. New bike! 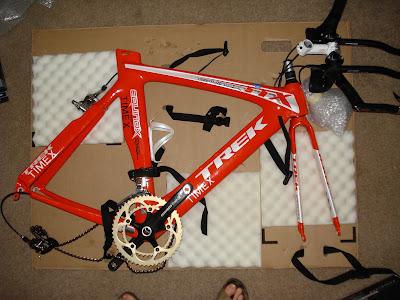 Dude you didn't run with the flu, did you? Bruce Denton was meant to be fictional, I think.