On Saturday I turned 25, which has to be the first of many depressing "important" birthdays. Why? Up to this point, "important" birthdays entitled me to new rights and privileges which was fine because I was OK with being one year older. At 16 I could operate a motor vehicle, 18 afforded me the right to vote, and of course the big 2-1 granted the ability to legally consume alcoholic beverages. 25? I get lower insurance rates and can now rent a car without having to pay the ridiculous "under age" fee. While this is certainly a good thing, it also means that insurance folk, or more importantly the smart statisticians they employ, have now deemed there is much less risk of me doing something stupid. IOW, they think I am now more mature. This is of course just a nice way of saying I'm old. So while this realization is a bit depressing, it by no way put a damper on the day...

The first order of business was the HiWAAY Huntsville Sprint Triathlon. The race consisted of a 5k cross country run + 6 mile bike ride + 400m swim and best of all started about a mile from my house (Gotta love when you can ride your bike to a race!). I had a lot of fun and was fortunate enough to hold off Huntsville stud Dr. Jonathon Krichev for the win.

Upon arriving home there was a package waiting for me. I opened it up and found a carrot cake from my Aunt Marianne. She is a baker extraordinaire so I was thrilled when I saw it. Inside was a card apologizing for the lack of icing and instructing me to go to the store and buy Betty Crocker cream cheese icing. Admittedly, I was a bit dissappointed at Mare's low expectations of my culinary abilities. Buy icing? Why would I do that when I can make my own? So after picking up some powdered sugar and cream cheese from Publix, I whipped up some icing and the cake was assembled. Yummy. 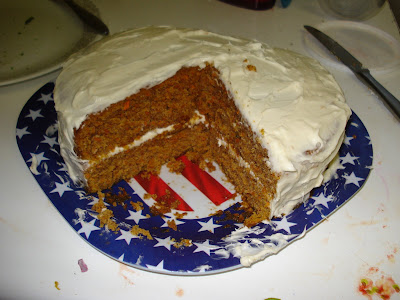 After a nice bike ride, it was time for the night cap. A group of us went to Bandito Burrito, a local hole-in-the-wall burrito place, for dinner. The food and drink were great (they have Dos Equis on tap) and we even got to see the beginning of the womens marathon. After dinner it was off to watch the Tennessee Valley Vipers, the local AFL2 team, in a playoff game. More beer was consumed, the Vipers won, and we migrated to Mason's Pub downtown. Shortly after our arrival the men's 100m final came on NBC so it was cool to be able to watch Usain Bolt DESTROY the field (incidentally... what are the Jamaicans on???).

As appealing as a post bar Waffle House trip was, I (thankfully) talked myself and everyone else out of it and was delivered home in one piece, without a stomach full of grease. All in all not a bad way to spend a birthday.
Posted by Andrew at 10:42 AM