So here they are, the Summer Games are upon us. The Olympics are great because they are the one time where athletes with whom I can relate are actually shown on TV and given some publicity. Generally the only sports on TV are the "big ticket" sports which feature "minimum" yearly salaries of six figures. In the Olympics on the other hand, most of the athletes can not afford to make a living off of their sport and if they can, it isnt a very glamorous life. Most of these athletes struggle with a "day job" while also trying to be competitive on a world class level. Pretty impressive if you ask me and something I can relate to.

One aspect of these particular aspect which has been talked about quite a bit air pollution. It will certainly be interesting to see how this affects athletes, especially in endurance events. Thus far, most people have been focusing focusing on the smog, but this article from SI.com raises another issue, the carbon monoxide levels. Apparently CO occupies hemoglobin, a protein in the blood, just like oxygen. Therefore when inhaled CO gets absorbed by the blood, it is effectively taking the place of an oxygen and lowering an athlete's hemoglobin count. This is akin to anti-EPO (EPO works by raising hemoglobin levels) so it will clearly have a detrimental effect on athletes.

The question of course is whether it will affect everyone the same or not. I suspect athletes who train at altitude will have a bit of an advantage if not for any physiological reason than for a physicological one due to the fact they will be used to exercising with less oxygen available. This experience will then allow them to moderate their pace better and keep a positive mindset, both of which should ultimately lead to a relatively better performance.

Finally, I'll end with this lovely picture taken by Rojo of Letstun.com. As he puts it, "That's the sun - in the middle of a 'sunny' day." 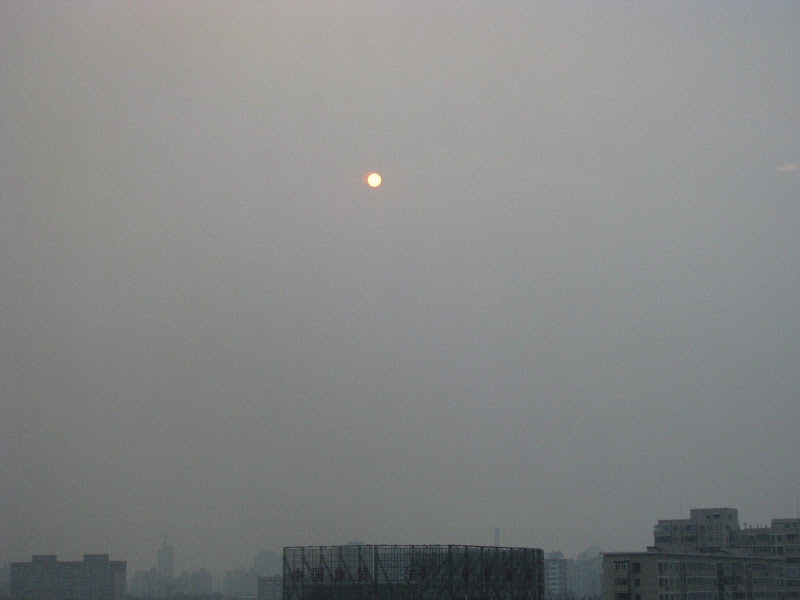 Mmmm wouldnt you love to run in that??
Posted by Andrew at 12:03 PM