Yesterday evening after picking up my CSA bushel of veggies, it was time for the usual Thursday night ride. Depending on the week, this means either 2h w/ 1h Zn3 or the dreaded 2h w/ 2x20min Zn4. Unfortunately this week I had procrastinated and left the 2x20 until Thursday (rather than Tuesday) so at 5:30 I was out the door for the weekly torture session. Little did I know, things would only get worse.

Only 15 minutes into my ride and just after riding onto the Arsenal, I got a flat. At first I just thought of it as a minor inconvenience which was simply giving me a little more time before the self thrashing began. Unfortunately however when I started pumping up my replacement tube from my saddle bag, it too had a puncture. So there I was with no way to inflate my rear tire.

I called a couple of people and luckily my buddy Justin was in the area and kind enough to pick me up and give me a lift home. Luckily I wasnt too far so it wasnt too much of an inconveneince for him. So by the time I got home and got the tire changed it was 7 and the motivation was REALLY lacking. It was hard enough to get out the door the first time, but now if I wanted to do the workout I realized I had only one option: the trainer.

So yeah.. nothing worse than having to sit on the trainer in the summer for a hard workout, especially when you had already been out on the road. But I sucked it up, turned on the Olympics w/o the volume, put some music on my computer, and pounded out the workout. While it was pretty painful, it ended up going pretty well as I was really trying put off my "Anticipatory Regulation" and push through the pain. The one concession I made was 4x10min instead of 2x20, but I think that was a good decision as my first 10 minutes were kind of crap anyway. Well admittedly I also shortened it from 2h to 1.5h but it was getting close to bed time and that Zn2 time is just filler, anyway.

All in all it was a pretty good session. After the hard part, I cooled down while watching Kerri Walsh and Misty May dominate on the sand in their white uniforms, so at least my eyes weren't hurting... 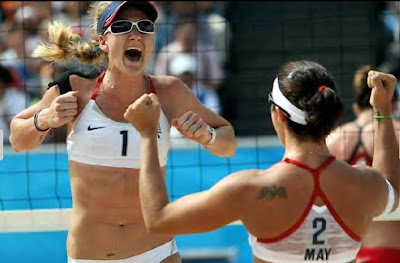 BTW, the title of the post is tribute to BIGZACH who is famous for late night trainer rides although his are later and much longer than mine.
Posted by Andrew at 8:31 AM