FL 70.3 RR, Orlando, FL- The day began before dawn with an extraordinary rendition of the Star Spangled Banner by RD Tom Zeibart. Then just as the sun was preparing to break the horizon, the cannon fired and we were off. I took it out hard and after a few minutes of fast swimming intertwined with pummeling, I thought I had made the front pack. A couple of minutes later though I looked up only to be disappointed. There were two guys in front of me swimming next to each other and a gap had formed between them and the pack ahead. In an effort to mitigate the damage, I moved to the outside to try to catch the group that was now slowly pulling away. Unfortunately I couldn't quite close the gap and ended up swimming the rest of the way alone. Somewhere around 1200m or so I began feeling the effects of my earlier efforts but hoped I could still maintain a decent pace all the way through to the finish. Coming out of the water, I wasn't sure if I was behind the first pack or behind second pack but someone yelled that I was around 9th place, so I assumed I had snuck out in front of the second pack.

Out on the bike, my suspicions of a decent swim were confirmed. Within the first few miles pre-race favorites Paul Amey and Santiago Ascendo came riding up beside me, validating my effort in the water. Here is where I usually comment on how many people go by me like I'm standing still and I'm left to ride alone. Not this time! I settle in and find that I can stay with the group at a very reasonable PE. Throughout the ride we see head ref and overall BA Jimmy R on his moto numerous times but everyone was riding legally and no penalties were given.

With the bike ride finished, it was out on the run. Immediately, Katie Perry's "Hot & Cold" popped into my head which I realized was a great metaphor for the rest of my race in a number of ways. For a refresher:

HOT: At the beginning of the run, I was stoked. There were three guys up the road and then I came off the bike with a group of about 15. This was the closest I'd been to the front of a 70.3 (with pros) this late in a race and could smell blood. First mile: 5:20!

COLD: "Wait a minute, I haven't run over an hour since November!" Hmm, something has to give…

As the race progressed, the suffering insued.

UP: My body temperature

The second and third laps were a total sufferfest. Luckily, I apparently wasn't the only one hurting as the aggressor also known as the beautiful Central Florida weather was impartially brutalizing.

IN: Passing Rhodes to move into 7th

OUT: Getting passed by a steadily moving Marsh to fall back to 8th.

After somehow holding off the competition for most of the run, Brandon Marsh passed me around mile 11. By this time I had long ago stopped looking at my splits and was really just trying to not fall over. All my energy then turned to simply making it to mile 12 and back to the pavement. Running scared, I made it there and somehow managed to drag myself through the last mile to hold onto the last "money" spot.

YES: Having friends and family at the race

NO: Not being able to have a coherent conversation after the race due to a severe lack of oxygen and sugar in the brain.

Full results can be found here. 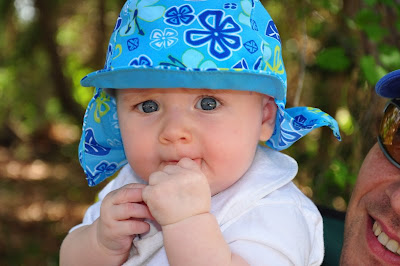 Nice work! Can't wait to see what you can do with a few weeks of solid running in your legs.

Excellent race. Glad to see you increased time in the water paid off. Oh... and remember... if it were easy, everyone would be doing it.

Great job, and loved the way you wrote your race report. I so do not miss that Florida heat from May through October.