Checking in from PHX

Although over the last year or so there had been some debate over the possibility of extending the Shuttle program, that was quickly shot down due to what would be exceedingly large costs. These costs would be derived from the necessity of "turning on" many vendors who have already delivered the last of their hardware for their respective shuttle components. The shuttle is made my a number of prime contractors and hundreds of subcontractors so needless to say there are a lot of different manufacturers! Trouble is, some of these companies have either stopped making certain parts or just gone out of business altogether.

With that having been said, there are still a few pieces of hardware being manufactured for the program. As some of you may recall, I had to go out to LA last year for a problem with an electroless nickel plating process for the Solid Rocket Booster (SRB) separation bolts. Well, this is the same process with likely the same problem but for a slightly different piece of the hardware, the separation bolt retainers. Basically, these parts hold the munitions inside the bolts. (Background: These bolts are about 2ft long and 6" in diameter. They are hollow, made of high strength steel, and eight of them hold each solid rocket booster to the External Tank. Once the SRBs are done burning (about 2min after ignition) the bolts explode and the SRBs fall back to the ocean). 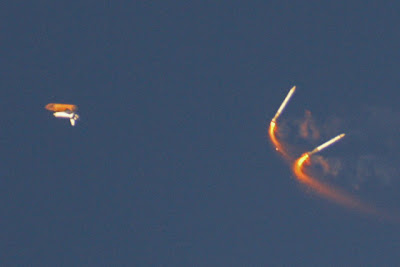 So anyway, Phoenix is hot. 93F in my rental car last night at 9:00. Luckily though that means that it also has lots of outdoor pools and I got to swim in one this morning. Also, being the desert, it is not raining, which is a welcome change from the 10 inches or so we've had in Huntsville in the last week. So while the run this afternoon wont be fun, at least it will give me a little chance for some acclimation before heading down to Orlando on Friday. Reports from the area indicate that a lack of rain over the last couple of weeks has resulted in record highs. So lets see... no runs longer than an hour + course with lots of sand + hot and humid = this should be a pretty awful run this weekend... cant wait!
Posted by Andrew at 10:17 AM

Love the "job" side of life posts.