Last Saturday the Rocket City Marathon was held and while I didnt run it, I did go out and supprt David in his first marathon. He's been hitting it pretty hard in training so I was excited to see what he would do. Going in the plan was to run 5:30s, putting him at the finish in around 2:25... pretty damn fast for a debut. It was an ambitious plan but not overly so according to Daniels' table and his recent half marathon performance.

After a tense morning (for him) the race was off. The weather was near perfect for the start, somewhere in the mid 30s and gorgeously sunny. As Dink said, "it is a "no excuses day!" David ran with a hat, arm warmers, slinglet, shorts, and gloves... appropriate for the conditions. Basically he was going for the Hall and Ritz look from trials.

In order to have his best race possible, David had given his wife, Stefanie, detailed notes about where and when to meet him on the course and what kind of nutrition he would require. This was really smart on his part as it is a lot easier to drink Gatorade out of a bottle than out of a paper cup when you are running along at 5:30 pace. 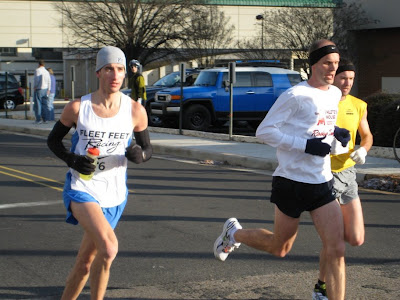 Our first stop was the 3 mile mark and David was tucked nicely into the group of about 10 (see above). The split was right on, 16:30. This was a perfect scenario for him because he could run his pace while at the same time stay in the group. 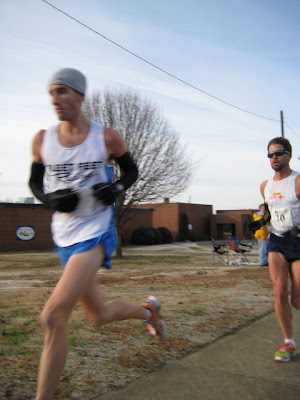 Next was the 7 mile mark. At this point the group was still about the same but the pace had slowed a bit. David reported that he had to keep things honest... ridiculous considering Olympic Trials qualifier Josh Cox was in the field. 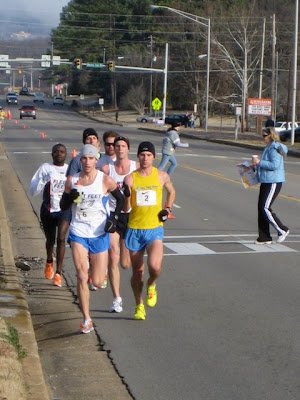 Our next stop was just before mile 10. David was still looking calm and relaxed leading a group that was now down to about six. They came through at 55:30, a little off 5:30 pace but he was still looking really good and I thought everything was setting up marvelously. 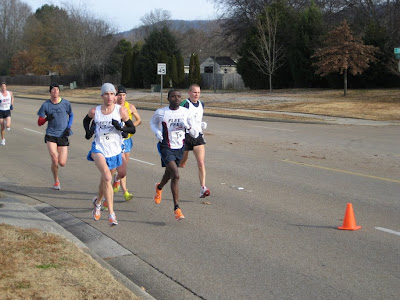 Through the half marathon at 1:13:00 and everyone was looking pretty relaxed. David was still leading the charge, like a champ. Someone had to keep everyone honest and apparently it was up to the hometown boy to do so. It should be mentioned that this was regardless of the fact that not only was this David's first marathon but the slowest PR of the other guys in the group was 2:22. So basically they were slacking, he was running with gravitas.

After the half the course more or less made a U-turn and started heading back towards downtown. Our next rendezvous point was around 16.5 and as the runners came through, things were looking a bit tense. There were still 5 together but it looked like something was about to happen. I knew David knew the course like the back of his hand so I was hoping he was just waiting for his spot, mile 21, to pounce. Mile 21 is a false flat uphill with a couple of turns so it is deceptively long. 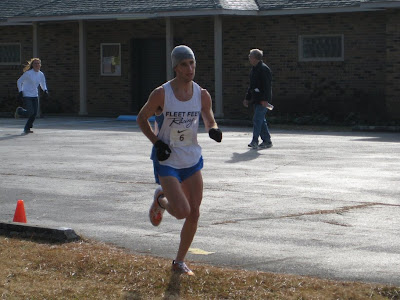 Before that though, we had one more meeting just past the infamous 20 mile mark. The saying usually goes, "a marathon is a 20 mile run with a 10k at the end." Well in the this case it was more like an 18 mile run with a 13k at the end. As it turns out, Cox dropped the hammer and started running 5 min miles at around the 18 mile mark. He would never look back. This strung things out and left David as the 5th of 5 coming through mile 20. However, his split was just over 1:50 and therefore still right on 5:30 pace. I thought he looked OK, but Stef was not so optimistic... 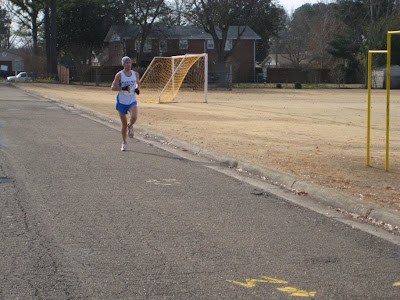 Fast forward to 23, our last aid station for David. We saw Josh Cox fly by. Then the 2nd place guy. Then the 3rd place guy. Then the 4th place guy. Finally David came around the corner, a little later than expected. It had taken him about 17:30 for the previous three miles, 5:50 pace compared to the 5:30 pace he had been holding earlier. Admittedly, those three miles are a bit uphill, but not much. At this point his stride rate had noticeably slowed and things were not looking good. He passed on both Gatorade and water as Stef, Matt, and I screamed words of encouragement. Stef was thinking, "Get your shit together!" but ended up giving some slightly more uplifting words (so she claims).

After that, it was off to the finish. The placing of the top 5 had not changed as we watched 1st, 2nd, and 3rd roll in. Josh smoked the last half and broke the tape in 2:21:23, putting over 2:30 into 2nd place in the process. Luckily we didnt have to wait too much longer to see Riddle's long looping strides. He kept "kept his shit together," controlled the bleeding, and finished with a very respectable 2:27:27. While he was hoping to go a bit faster, everyone, even the great Haile Gebrselassie, struggles in his or her marathon debut (Haile was 3rd in London in 2002). 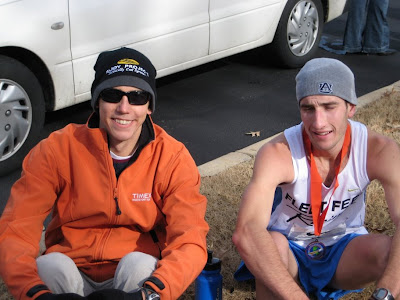 As they say, "A picture says a thousand words." I swam 4k in the morning. David ran fast for over 26 miles. I feel fine. He feels slightly below marginal.

Full results of the Rocket City Marathon can be found here. Check them out, there were some awesome performances!
Posted by Andrew at 10:47 AM

Yeah, David is pretty fast which makes him a great training partner ;)

I'm sure I'll do a marathon some day but not anytime soon. Could be fun but I have a feeling the swimming and biking would be seriously compromised in order to properly train.