Before diving into this, I have to give a big "Thank You" to my sister, Katie, for picking me up from the airport and driving me around on Friday. She had to put up with my impatience/anxiety/drama-queen-esque attitude most of the day on Friday as we had to rush around to take care of all of the usual pre-race nonsense.

As for the actual race... Saturday early morning went off without a blip. I went through my usual routine and was feeling calm, confident, and focused. I was feeling great about my training and was ready to put it all together and EXECUTE because I knew if I did that I'd have a good result.

After a swim in the Gulf, I found myself on the beach at the start line for the World Championships. It was a picturesque setting with the sun rising and a calm ocean in front of us. The cannon sounded and we were off. I didnt have a great start and was a bit boxed in. By about 1/4 of the way into the swim I had found some open water and settled into my rhythm. Unfortunately I had been boxed in and had already lost contact with the front pack so I spent the rest of the race swimming by myself. I could see the other swimmers ahead and although I thought I was catching them I could never quite close the gap.

Coming out of the water I was a little dissapointed with the time but hoped I wasnt too far down. After a quick transition I was out onto the bike. It was a crisp day and I was ready to DOMINATE the bike ride. After 7 miles or so a couple of guys passed me and went about 50 meters up the road. However, they werent really pulling away and by the 15 mile mark I had almost caught back up to them. By this time I was feeling great and more importantly, moving FAST. My first 5 miles had been a bit slow at just under 12:30 but the next two 5 mile splits were both under 12 minutes. Additionally, I was feeling really good and even hoping to open it up around mile 40 and negative split the ride. The next few segments continued this sub 12 min 5 mile trend and I was looking forward to a nice PR on the bike.

Then, around mile 32, it happened. I heard the sound everyone dreads when they are on a bike. Within seconds, my rear wheel was unstable and I was forced to pull over and stop. I immediately got to work popping the wheel off the bike and fixing the flat all the while trying to keep a good attitude and reminding myself that even if I lose a couple of minutes, I can still have a decent finish. I finished the pit stop NASCAR style and soon enough I was back on the bike.

As I got up to speed, I was pleased with the efficiency of my change and was still determined to have a good ride, even with the stop. I knew I couldnt make up the time I had lost but I could still turn in a solid time by simply staying focused and riding strong.

Then no more than 5 minutes later, it happened again. This time however, it was the front tire and the air screaming out of the tube was taking my chances for a decent finish with it. Somewhat luckily I was close to the bike preem where there was an official with a race radio who called for support. He asked if I wanted to continue a couple of times, almost like he thought I wanted a ride back. I just wanted a tube... the thought of not finishing hadnt crossed my mind.

Needless to say I was pretty upset but at that point, what could I do? Not much so I sat down and watched male and female pros scream past while waiting for tech support. As I sat there I was determined not to let the unfortunate turn of events ruin my day. I sat there, soaked up some sun, and was just happy to be able to be out racing in a World Championships in beautiful weather, nonetheless.

Eventually the tech support came, I got my flat fixed, and I was off. The temporary lull had come and gone and now I had to find a way to get going again after a 20 minute break. The remainder of the ride was strange. I was racing, but almost in the twilight zone as in the last 20+ miles I saw a grand total of 2 competitors: pro women who I passed. I was actually worried about a cop not paying attention and letting someone pull out in front of me as I was screaming home. I did have a redneck in a pickup truck try to cut me off but the cop was luckily on top of it.

Finally, I arrived back in transition at which time I was greeted by the announcer with, "and it looks like we have another of our female pros finishing up the bike ride!" Awesome. Incidentally, my bike splits from IM live tell the story:


The run actually started with some excitement as when I started my run Terenzo, who was in 1st place, had just started his 2nd lap of the run but the 2nd place male was still on his 1st lap. So it appeared, for those not paying attention, that I was in 2nd place. I actually had the NBC guys taping me for a solid mile or so until the following conversation took place:

NBC Cameraman: I'm assuming you are in second place...
Me (smiling): Nope, I'm just on my first lap!

At that point the cameraman mumbled something to the driver and the motorcycle sped away. So much for the pub. A bit later, I caught Terenzo and we had a little conversation:

Me: Dont worry, dude. I got two flats and am on my first lap.
Terenzo (In Aussie accent): You just made me shit my pants! 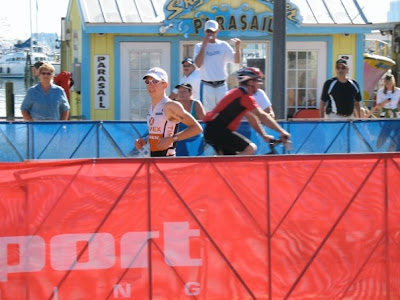 The second lap was considerably less exciting and I lost a little focus in the middle of it. It was kind of hard to push through those hard miles when I knew my time was still going to be slower than a number of girls. But I made it to a mile to go, had a pretty decent last mile, and was more than happy to finish.

Immediately afterward I apologized to Terenzo for making him soil himself and went over and talked with my awesome family members. Everyone was really supportive, including my cousin, Aiden, who is about 5 years old and asked, "Andrew, what took you so long??"

I'll fill in some details (hopefully with pics) about the rest of the day later, but thats all I've got for now. While I was certainly disappointed to not be able to showcase my fitness, I still had a good time celebrating an otherwise successful season with friends and family.
Posted by Andrew at 8:30 AM

2 flats just is NOT fair! Your attitude is amazing - and it is pretty funny how you turned the first lap into a story to freak some out who were in the front on their 2nd lap! Thanks for sharing with us - and better luck for next year!!

Ahh, what a bummer! And don't worry, I've been mistaken as a boy when I'm racing...so which is worse? I think I'm going to wear all pink next year. Stupid gender neutral tri-suits/visor/hair pulled back!

No worries. We don't need race results to convince us you're still a badass!

Bri: At least that is only because you are fast...

Andrew I was wandering what happened. Knew you must have got a flat ...two yuck! Great job on making the most of it!