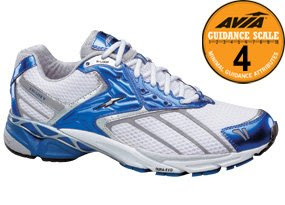 Admittedly I was a bit skeptical at first as well. In high school I worked at Track Shack, a technical running shoe store in Orlando, FL, and while I was working there Avias were considered nice enough shoes but certainly not for real runners. Maybe for walking or generic gym usage they would get the job done but we didnt carry them.

So needless to say I was a bit skeptical when my friend Shawn suggested I try a pair. Shawn previously worked at Asics and has put down some pretty serious times himself (certainly faster than me!) so I figured I’d at least have to give them a chance. He recommended the Avi-Lite which is, according to Avia, a “lightweight trainer for a neutral to slightly overpronated foot type.” The description sounded about right for me, as I have run the Asics DS-Trainers and Nike Zoom Elites in the past, so I decided to give them a go.

When I first laced them up, my initial reactions were that they were really soft and possibly a bit wide. They seemed to feel pretty comfortable just walking around but I was harboring concerns about how that feeling would translate out on the road while running. I relayed the information back to Shawn and he informed about the 2nd set of holes which can be used to tighten up the fit and convinced me the shoes would feel just as good running as they do while just standing. At that point I had no excuses; I had to give them a try.

My first run in them, surprisingly enough, felt fine. This was about 3 weeks ago and since then I haven’t run in anything else. While they are soft while walking, this is just a result of the cushy liner Avia uses for inserts. Once I started running though, they were nice and responsive. Additionally, they provided a nice ride, allowing for a smooth, efficient foot strike. Finally, I’ve done some faster running in them as well and haven’t felt weighed down as I sometimes do when trying to run fast in other trainers.

Finally, I should mention that in addition to feeling good, I have not had any knee pain since switching to the Avias. So not only do they feel good while running but after as well. And although I dont blame the injury on the shoes in which I was previously running, it is certainly a credit to the new shoes that they arent giving me any pain.

So consider me a convert!