Race morning started out a bit ominous as Kurt Nelson and I saw lightning on the drive over to the race. Undeterred but admittedly a bit apprehensive, we arrived at the race site and proceeded to head to T2. This race featured two transitions which meant we had to drop off our running shoes at T2 before heading to T1 to setup everything we'd need for the bike ride. Although I thought this would be a huge hassle, it ended up not being too much of a problem.

Swim, 24:51 (9th)
Into the water and we were off. I had a decent start but then after 6-7 minutes realized I had missed the first pack. A bit of a bummer, but it looked like it wasn't too big, so I was hopeful I could still salvage a decent place at the finish. After leading what (I think) was the 2nd group for about 700m, someone came by me and I ended up exiting the water with a couple of others. 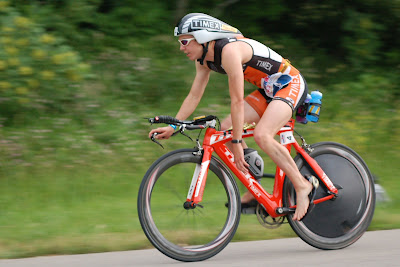 Bike, 2:17:27 (12th)
As I began the bike ride I was feeling pretty decent. While the severe weather appeared to be holding off, there was still significant cloud cover which kept temperatures cool and the general mood a bit macabre. Riding with my lovely PowerTap, I was getting dropped on the way up the hills but making up time on the way down and on the flats. On this course, this little series was not an isolated occurrence. Yes, believe it or not, Kansas (at least the eastern part, anyway) does have some hills. This course contains most of them. So between the constant up and down, the slightly less than desirable roads, and what was actually turning out to be a pretty chilly day, I was more than ready to get off the bike when I finally arrived back in Clinton Lake Park.

Run, 1:15:07 (5th)
Off the bike I thought I was around 15th but wasn't really sure. After the disappointing swim earlier in the race and fast start on the run at the Florida 70.3, I was really just focusing on starting off controlled and trying to pick off as many people as possible. While the cool weather made biking uncomfortable, I knew it would mean fast times out on the run course so I just wanted to make sure I got invited to the party. Additionally, the whole feeling of near death for the last 8 miles of the run in Orlando just wasn't much fun. 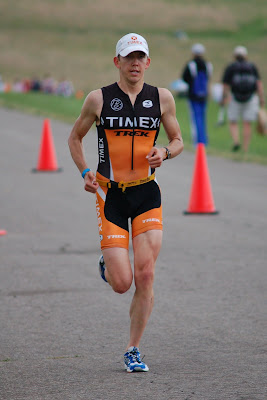 So I set off in what I thought was a conservative pace. First mile: 5:20. Just for a refresher, this was the same time I ran my first mile in Florida and that didn't exactly end up so well. On the other hand, I felt good, the weather was cool, and who knows, it could've been short. Continuing on, I slowly began picking people off while running around 5:35-5:40. I just tried to keep things nice and easy, telling myself I could always pick it up over the last few miles if necessary. Finally I got to mile 10 at which time I had maneuvered myself into 8th place with Simon Thompson a couple of minutes up the road but moving pretty quickly. I started feeling the effects of my hot early pace but was able to hold it together reasonably well for what I thought was a pretty good run, considering the circumstances. 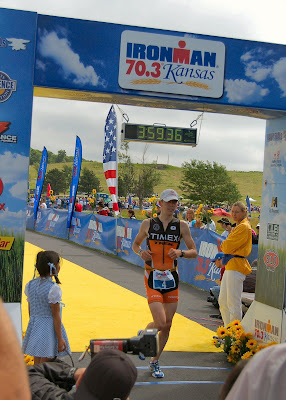 PS A huge "Thank You" goes out to Dale Brueggeman who apparently didnt learn from last year and graciously hosted me again this year. Also, thanks to Dale's friends from Dog Days who came out to volunteer. Every aid station was full of enthusiastic and extremely helpful volunteers and according to Dale a large majority of them were from the Dog Days workout group.

Wow. Your place doesn't justify how awes you did! That's great!

I think I would have welcomed a hilly bike course yesterday. I have never pedalled for 56 miles straight and I wanted to chop my legs off.

But Clearwater is going to be a sweet Andrew/Rudy/Alyssa reunion!! Get pumped!

also, not sure if you caught this question in my eagleman report, but do you need to be wearing your run bib number on the bike as well?

Great pictures. All that swimming is starting to show up in your shoulders.