The wonderfood that is apple crisp and other ramblings...

With the ride postponed to this afternoon today due to chilly early morning temperatures, I decided to make some apple crisp. Now is the season for apples and when I saw some Granny Smiths on sale at Publix, I couldnt resist. What I didnt realize, however, is that it is great pre bike ride food. Of course with the enourmous amount of sugar, this should be no surprise. It was so good preride, I had some more after the ride as well: 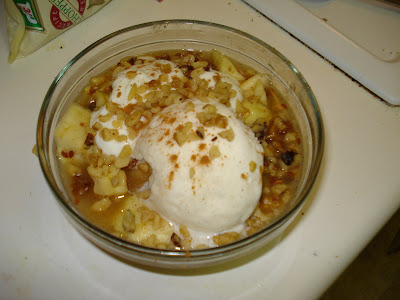 And here is the cumulative damage: 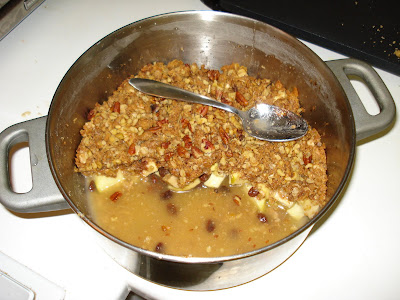 In other ramblings... naps are awesome. Especially when they follow swimming, running, and homemade buttermilk pancakes... The WLOCP next weekend in Jacksonville will be huge. Florida and Georgia both had comfortable victories this past weekend setting up next weekend's game as the de facto playin for the trip to Atlanta in December. The game also has national title implications with the loser all but gone from a chance at the national title and winner still very much in the hunt (albeit still needing some help). As if all that werent enough, there are the antics from last year which were at the annual preseason SEC Media Days... Rednecks like their dogs. They also like to let their dogs run around their yard. Thirdly, their dogs like to chase things, like cyclists. When it only occurs once in a while, getting chased by a dog isnt too big of a deal. But when it happens 4 seperate times by a total of 6 dogs it has just gotten out of hand... I feel really sorry for Rich Brooks. Its never good when your defense cant stop the opposing team's offense. It also isnt good when your offense cant move the ball against the opposing teams defense. But its just downright awful when you also get your first two punts blocked. Result? Florida 28, Kentucky 0 after the first quarter.... Speaking of things that arent good, it is never fun to get stung by a wasp, especially when it is 2h into a 3h ride... How 'bout the hoos?? Somehow Virginia pulled out a big win over GA Tech. This can only mean one thing: a loss next week against Miami even though the hoos will certainly be favored... It has gotten chilly here and will be getting cold next week. Good thing Clearwater is just around the corner... Despite the aforementioned "distractions" I had a great ride today. Of course I wouldnt have known this without the PT. Yes, it is just that awesome.
Posted by Andrew at 4:49 PM

Yummy!!! Seriously when are you coming out with the first Rocket Scientists Recipe book?

FYI, I made the recipe without the lemon zest and cardamom and it was still really good.

The only downside to the recipe is it did take about 55 minutes to bake. However it was well worth the wait :)