Yesterday started off with the Monte Sano 15k. I have been doing a long tempo run on Friday night so I really just switched it to Saturday morning this week and did my usual 50min Saturday morning run on Friday night. Heading into the race I planned on running the first half in 5:35 pace or so (the course is pretty hilly) and then picking it up the last few miles. I felt good starting out and was in 2nd for the first few miles and everything was going according to plan. However, going up a couple of the steeper hills I started having some lets just say... internal plumbing issues... and was worried about changing pace too much. The legs felt fine though so I just kept the same pace for the rest of the race and upon finishing continued straight through the chute and into the little boy's room.

After clearing things out, I felt much better but was dissappointed about not being able to accelerate at the end of the race. Still though, the legs werent really sore and I ended up getting in 18 miles on the day with 9.3 @ 5:37 pace, so all in all it was a pretty good workout. Even better, it only costed me $15 to sign up and I got a long sleeve tech shirt and a free pair of shoes as an award. Not a bad deal! Plus, even with the digestional issues, it was a lot more fun (and a more quality workout) doing the race as opposed to the long run by myself.

From there I headed home to clean up, watch some football, and track the IM. Texas-Oklahoma put on a good show as well as South Carolina-Kentucky.

At the end of the early games it was time for a bike ride. Because I didnt get to open it up as much as I wouldve like to at the race, the ride ended up being better than expected. 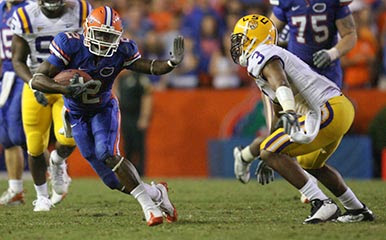 With that out of the way it was time for the highlight of the day: Florida-LSU watching with the Spring City Gator Club. The gathering was at a member's house this week and due to the matchup with LSU, the club bought some gumbo and asked everyone to bring something to share. I made some cornbread and was stoked for the game.

In case you missed it, the game was total domination for the Gators as they "hung half a hundred" on LSU. It was the first time since 1996 that LSU had given up 50+. Anyone want to guess who that came against? Thats right, the Gators, under some guy named Steve Spurrier.

But back to the game. It really was a great performance by the Gators. The offensive line opened up some nice holes for freshman running backs Jeff Demps and Chris Rainey helping Florida amass 265 yards on the ground. Additionally, the defensive front stepped up big holding LSU to only 80 yards rushing. This is dispite the fact that LSU's leading rusher, Charles Scott, had rushed for over 100 yards in every game this year. And finally, Tim Tebow was Tim Tebow. I can only hope they'll (yes they, NOT we) play this well the rest of the year. If so, it should be a great season!
Posted by Andrew at 2:32 PM