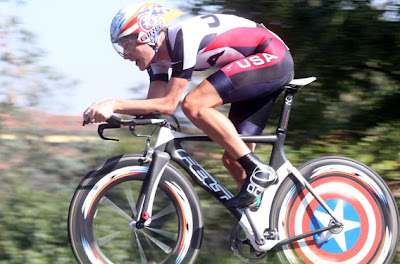 All in all this article in the NYT about the TDC is decent at best. However, this quote by TT extraordinaire, Dave Zabriskie, is priceless: “Being good at the time trial, it’s mostly mental,” Zabriskie said. “If you think you are having a good day, you are probably not going fast enough. You just have to believe that it is possible.”

So much of time trialing, and endurance sport in general, is mental. On one hand, an all-out effort is going to hurt and, as Zabriskie says, if it doesnt, "you're probably not going fast enough". On the other, you have to know this, accept it, and at the same time maintain a positive attitude throughout the race in order to have a truly optimal performance. In some ways cyclists like to overdramatize TT's but in all honesty I believe this helps. While constantly complaining about how much the TT is as bad as pure torture contains a bit of hyperbole(Really? Torture... like waterboarding??? Come on...) , it also helps to mentally prepare themselves for an optimal effort. This only helps, though, if they also believe they will "conquer" the pain and ride fast. Perhaps then it is no coincidence that most great cyclists arent exactly lacking in self confidence as the intense belief in ones self can have a very positive impact on performance.
Posted by Andrew at 2:23 PM

Hey Andrew
I really enjoyed this...these are the things you need to read every day over and over to remind yourself to keep digging deeper! Hang in there with the weather and your injury!