Racin in Macon (and Huntsville!)

It was a pretty busy week last week! Things started with a bang last Monday with the 32nd annual Cotton Row Run in downtown Huntsville. This is the biggest road race of the year in Huntsville, so its always a lot of fun. However, it is also always hot, humid, and hilly, so its usually a bit of a suffer-fest as well.

I kept things under control and ran 34:40, which was only good enough for 16th place. This race has a pretty substantial prize purse, though, so there were a few "local" Kenyans in town to make some cash.

Saturday, on the other hand, it was my turn to bring home the bacon, as thankfully some of the attributes that help Kenyans run fast, don't exactly help them swim fast. On the line was $1000 for the win in the Coliseum Rock N Rollman Half in Macon, GA. I had won the race last year and was excited to go back to defend my title.

As for the race itself, there isnt much to report, other than it went pretty darn well. I broke away a few minutes into the swim and was able to get a nice gap on the field. 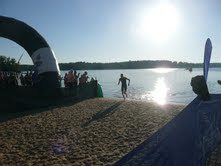 Out on the bike, the QR felt great, but it was difficult to tell just how well I was doing, as the course was windy and hilly and I was riding my PRO disc (so I didnt have power). I always ride scared, though, so I just put my head down and pedaled hard. As each 5-mile split ticked by, I became more and more confident that no one would catch me. 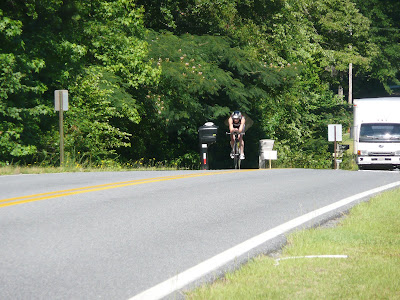 Sure enough, I came off the bike in first. I finally got a glance at the second place guy as I was about half a mile into my run. I figured I had about 5' on him at that point, so I knew as long as I had a decent run, I'd be able to hold him off. At around mile 4 there was a turnaround and I had him at ~5'30" back, which meant we were probably running about the same pace. I was feeling OK running ~6' miles on the hilly course, so I knew as long as I kept things under control, I'd hold him off. By the second out and back around mile 9, I had close to 6' on him, so at that point I knew I just had to keep running and I'd get the win.

I ended up finishing in 4:10:09, breaking my course record from last year. Better yet, my bike split was 2'57" faster than last year and my run was exactly 3' faster. (2011 results and 2012 results, for reference) Now certainly the cooler temps this year helped the faster run split, but I'm really excited about the faster ride. I'd like take all the credit and say it was a gain in fitness, but I'd be remiss not to mention the QR CD0.1. That bike is fast!

Up next? Good question. The next big race on the calendar is Ironman Louisville at the end of August. Dumb, I know, but I think its about time I improved on my PR from 2005. In the meantime, there will be plenty of local races, as well as hopefully another 70.3 or two.