I grew up in Orlando and went college in Florida, so I always look forward to going down to this race. It was also my second half ironman distance, and where I qualified for Hawaii way back in 2005. However, this year was like no other. First of all, the race venue had changed with a move from Disney's Fort Wilderness to Lake Eva, in majestic Haines City. I vaguely remember traveling to Haines City for a soccer tournament sometime in the mid 90s, but this was my first time heading there for a triathlon.

The other big difference in the this year's race was, of course, the Lance effect. Lance, yes that Lance, had committed to this race when he announced his "come back" to triathlon and partnership with WTC, and needless to say it was pretty well publicized.

The first difference was in the transition area as we were setting up in the morning. I've raced (as a Pro) in the 70.3 World Championships a few times, and there were always a lot of media there. But this is first time I've seen such a huge throng of other racers standing near our section of the transition area. Furthermore, this is first time I can remember our section of the transition area being separated from the rest. Other than being midly amusing, none of this really affected my preparation any, and I went through my pre-race motions without any issues. 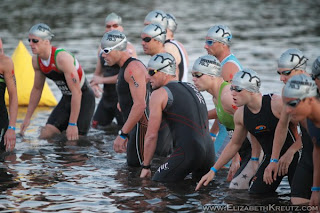 Finally, it was game time and we were off. I had a decent enough start, but was still further back than I wouldve liked after 100m. Thankfully though I was able to pass people and slowly made my way up through the pack. The swim was an unusual 'W' shape, and it wasn't until the last straight coming back to shore that I realized I was in a pretty good position. I was in a group with a few others and was pretty sure there werent many others up the water.

Pretty soon I was tapping the guy's feet in front of me, at which time I looked up and was pretty sure it was Lance. He and another dude made a final sprint for the finish, and I stumbled a bit coming out, causing me to exit the water around 6th in ~25min, only about 1min20 down from the lead.

Out on the bike there were considerably less spectators and also less racers. My swim group took off immediately, likely chasing Lance. I dont think I couldve caught up with them if I wanted to, but if I had, I wouldnt have been able to hang around for long. So, I was all alone for the ride. It was hard, as finishing into a headwind it always tough, and I finally came off the bike in around 2h20.

Out on the run the Lance effect was again in full force. There were noticeably more spectators than usual, especially for a course in a small town. But it was funny how many fewer were there for my last loop... I ran right at 26min for the first two loops, but then slacked a bit on the last one and finished in 1h19. 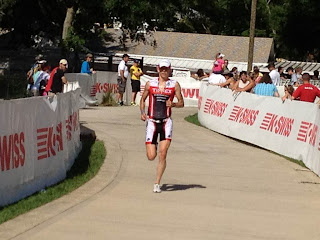 (As an aside, I've been wearing some Nike Lunarspiders for my track workouts and have really enjoyed them. They are super light and responsive, but I think they're a bit too flimsy for a 70.3 run. That, or I'm just not running fast enough to take full advantage, because they definitely make me run faster on the track!)

So all in all 4:08 in 9th place, which I was pretty pleased with, especially given the lowered training volume this year. This is right in line with recent performances at this race, and I'm really excited for the rest of the summer, as I've only recently started more long course specific training.

Next up: RockNRoll Man Half  (its a half ironman, but they cant call it that...) on June 2nd
Posted by Andrew at 6:56 PM