I was really looking forward to this olympic distance race on Redstone Arsenal because the bike course covers a lot of the same roads I use for my long bike intervals. Additionally, its always nice when you can sleep in your own bed the night before a race!

Arriving at the race site, there was a palpable excitement in the air. For a number of participants, this would be their first Olympic Distance race and many were more than a little worried about the 1500m swim awaiting them in the Tennessee River. I felt good during my warm-up and soon enough we were lined up on the dock, ready to start.

Incidentally, not knowing any better and having been brainwashed by the Team Magic crazies, RD Mike Gerrity made this race a time trial start. Its not his fault; its all hes known. However, I've since convinced him of the flaws of this system and am proud to say next year there will be much more exciting wave starts. 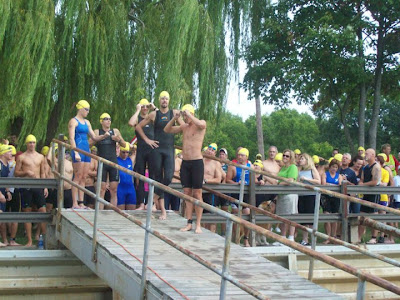 So there we were, lined up and ready to go. Two ex Alabama swimmers, Kyle Lee and Bruce Gennari, were first and second, followed by father of four Dr. Jon Krichev in 3rd followed yours truly in 4th. We jumped (NO DIVING ALLOWED) in sequentially in 5 second intervals and the race was ON.

Once in the water, I set off trying to catch Dr. Jon. It took a bit longer than expected but I completed the pass after 3-400m or so. Sadly though, Bruce was already out of reach so I just put my head down and pushed. After rounding the two turns, it was time for the long (800m) drag to the start. There werent many buoys so it took me a while to point myself in the right direction. Once I picked up on the neon orange, though, it was just a matter of focusing on my stroke and pushing as hard as possible. I finally reached the ramp in a little over 20 minutes and after a quick transition was out on my bike.

Starting the ride, I knew I had my work cut out for me as neither Bruce nor Kyle were in sight. I got up power relatively quickly and just focused on killing it. Finally, about half way through the course there was an out and back and I knew I'd get a chance to see how far up the road the others were. My quick math had Bruce around a minute up the road but Kyle, following the lead motorcycle, was nearly 4 minutes ahead. Needless to say, this was not a good sign.

Arriving in transition after 1h on the bike, I knew I'd have to have a great run and hope Kyle blew up in order to catch him. I took off in pursuit, cruised by Bruce after about half a mile, and focused on running fast, coming through first mile in 5:23. After a flat first mile winding through a dirt path in the woods, the course transitioned onto a hilly dirt road. I was hoping the uneven surface would deter Kyle but he was still out of sight after every turn. Finally I arrived at the out and back portion of the course around mile 4. A rough time check told me he was still around 2.5min up. I hadnt totally lost faith but knew my chances were growing dim as he looked like he was still moving pretty well and the overcast skies kept the temperatures comfortably cool. Pushing on, it was back on the dirt road for the last mile before I finally crossed the finish line. A 34 and a half minute run gave me a 1:57 finishing time, a little over 2min back from Kyle. 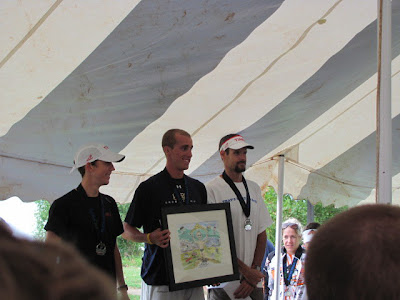 I was certainly disappointed to lose, but at the same time I was pretty pleased with how the race went. I felt good in all three disciplines but Kyle just crushed the swim and bike, which carried him to a well deserved victory.

Post race, though, was when the fun really started. Slip-N-Slide in the backyard! 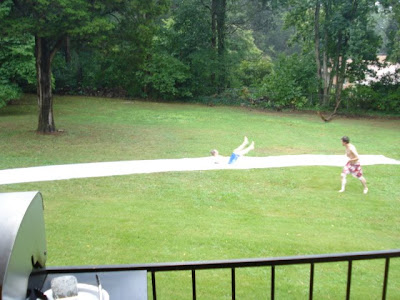 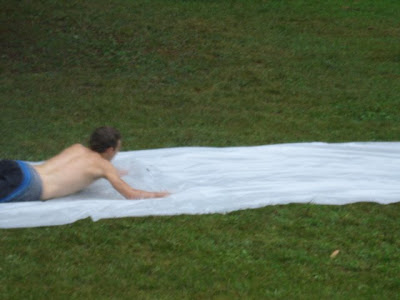