With the race starting at 7:30 in Guntersville, I got to sleep in my own bed and didn't even have to change my alarm clock, as 4:30 is my usual weekday wake up time.

As usual this race, like all Team Magic races, featured a TT start. Unlike in the past, when they seeded people according to swim time, today the RDs decided to let the 60 and over crowd start first, and then proceed from fastest to slowest. As a result, I had #46 and was honestly a little worried about swimming over some of the older racers. I dont mind having to swim through a crowd but I do feel pretty bad swimming over people. (Now, if only there were a way to avoid this...........)

So after the first 45 were in the water, I was off. By about half way through the swim I had passed just about everyone except teammate and uber-swimmer Bruce Gennari and a kid from the University of Alabama's triathlon team. Bruce was on his way out of transition as the 'bama kid and I were entering. I got out of transition a bit ahead of the bama kid and was out trying to limit my losses to Bruce.

I felt good from the start of the ride and immediately started hammering. Then, after a few miles, the 'bama kid passed me, which surprised me a bit. Once he completed the pass, though, the pace slowed a bit... enough for me to start getting antsy. So I passed him back and kept pressing forward. I wasnt worried too much about him beating me but I wanted to make sure to stay as close to possible to Bruce so that I could reel him in on the run.

Coming to the end of the ride, I thought I had dropped the kid so I was surprised to see him as I was racking my bike. Although this caught me a bit off guard, I was still pretty confident I could out run him and still had the matter of catching Bruce to deal with.

We took off on the run and the kid was killing it from the gun. It took me about 3/4 of a mile to get separation, at which point I focused solely on catching Bruce. My legs were a bit tired from the proceeding week of training but I still thought I was moving reasonably well. I came through the mile at 5:20, a few seconds slower than PE was telling me but not terrible. Finally, just before the turn I caught Bruce and turned my sights for home. Second mile was 5:30 which was a bit disconcerting but not too bad considering the turn around and slight hill in the middle. From there on out, it was a race against the clock. I knew I'd be first across the line but with the TT start, no "lead" is ever safe. I opened it up, raced across the finish line, and waited for the others to see if my time would hold. 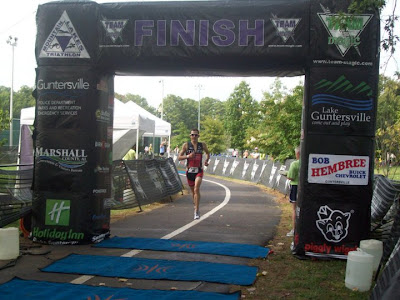 Bruce came across second, which was a bit surprising as I thought the kid would catch him after his fast start. 3rd across the line was Dr. John Krichev who started behind both Bruce and me, so I knew that was a solid performance for him.

As it turned out, I held on for first, Krichev was 2nd, and Gennari took the final spot on the podium.

It was great to see everyone out there for a warm but otherwise beautiful day for racing.
Posted by Andrew at 2:45 PM

Congrats Andrew.
This was a fun race at a pleasant rural venue.
I put in my best (novice) performance to date, and I plan to be more competitive next year. So watch out!
I share your concern about swimming over people. Burly guys like us need to avoid injuring the more delicate racers.
I am thinking of going semi-pro
Please let me know if your learn of any companies wanting to sponsor up-and-coming 45-year-old triathletes.
See you at the Nat.
Swimmer dudes rule!
Roger

Hey, awesome account of the race!! I'll see you on Saturday

Thanks! Yes, Saturday should be fun, assuming I dont drown in the pool...