Saturday morning I raced the Huntsville Sprint Triathlon which celebrated its 30th(!) year, making the race older than me! Anyway, this is a pretty unique event consisting of a 3 mile cross country run, a 6 mile bike ride, then a 400m swim in the pool. The run course is very challenging and features a steep, life-sucking hill in the middle.

After warming up as I would for a 5k, I arrived at the starting line about 10 minutes before the start. As we were waiting for the gun, a guy next to me asked me what my pace would be. I told him I expected to go out around 5:40, but quickly realized he was out of town and didnt realize that on the CC course, you should add at least 15-20sec/mile to your equivalent road pace in order to get an idea of what you should aim for. I think he realized that quickly, though, and I didnt see him after the first 400m.

I did, however, have someone pretty close for about the first mile. However, after I got down the big hill and into the second mile, I realized I was pretty much all alone. I hit the hill and was actually still feeling (relatively) good at the top so I continued to cruise the rest of the run all the way through to the finish, right around 17min. 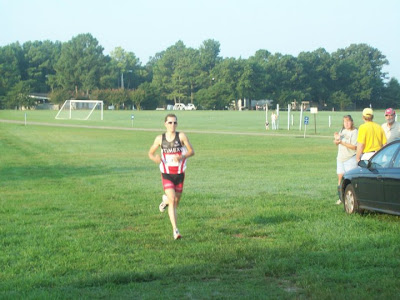 Finishing up the run. I'm sure the others are on their way...
From there it was a quick transition and I was out on the bike. Attempting to bike hard after that run just isnt fun. So I took off spinning like crazy to hold onto my lead. There is an out-and back portion which allowed me to get a quick check on the comp, and it looked like a I was somewhere around 2 minutes up, so that was reassuring. The rest of the ride was uneventful, save the last intersection with a light where the cop, who was there to direct traffic, was waving a car through as I was about to arrive. Thankfully my yelling seemed to be rather effective and a near catastrophe was diverted.

Off the bike and into the pool and for 400 meters. I made it through without drowning, jumped out, and was happy to notch my 3rd win in a row at this event.

Hanging out after the race was a ton of fun as it was great to see so many people experience the sport of triathlon for the first time. Although this race gets a lot of beginners, it is certainly not easy! The run is actually very difficult and it is always hard to have to swim at the end of a race, even if it is only 400m in a pool, so congrats to everyone who finished!

Next up: Rocketman Triathlon this Sunday!
Posted by Andrew at 1:45 PM