So yes, despite the lack of updates here, I have been racing this year. Unfortunately just not nearly as much as I should be. And in this case, the lack of blogging and lack of racing were pretty much due to the same thing: more working! Well, that and the two IMs on the schedule. Luckily building a rocket doesn't suck all the time, so being really busy at work isn't really a bad thing.

So, on to the race! Believe it or not this was my first 70.3 in over a year (since FL 70.3 last year), so I was certainly overdue. I was also looking forward to a break from the monotony of IM training. I'm getting ready for IM Louisville (again), so for the last month I've been a full on weekend warrior. This meant the "taper" consisted of limited training the Monday - Friday leading up to the race in conjunction with a trip out to California for work. Fun times, indeed.

The morning of the race was picturesque, except for the slight wind our of the north, which was only a problem because we were swimming one way... south to north. After a little warmup, I quickly realized I'd be wet longer than usual. It certainly wasn't the choppiest water I've ever swam in, but the chop combined with the current definitely made it slow. When I exited the water, I saw a "29:XX" on my watch and thought I was in big trouble. However, after seeing that I was actually only 2min back from swim stud David Kahn, I wasnt too upset. 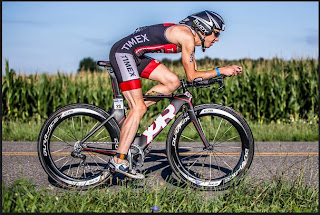 The bike, on the other hand, was a different story. An unseasonably cold day in Michigan (low 60s) meant I was chilly from the start and just couldnt get warmed up. Riding into the sun on a chip seal road while getting passed by groups of riders also wasnt fun. However, I was downing gels like it was my job, and finally started feeling better as the ride progressed. I seemed to finally settle into a decent rhythm and managed to not get passed in the last 25 miles or so. So yeah... riding solo as usual. 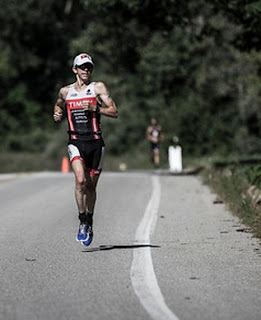 Out onto the run, and I was finally able to appreciate the beautiful day. I felt considerably better with my legs under me, and set out at a pretty good clip. I quickly settled into 5:50-6min pace and was pleased with my speed relative to effort. The last few miles hurt, and although it felt like I was speeding up, my mile splits indicated otherwise... :-0.

In the end I finished with 2:20 bike and 1:18 run. Both are certainly pedestrian given the conditions, but I was actually pleased with them considering the lack of taper and recent IM training. Really though, the race reminded me how much fun racing is... I just wish I had time to do more of it! 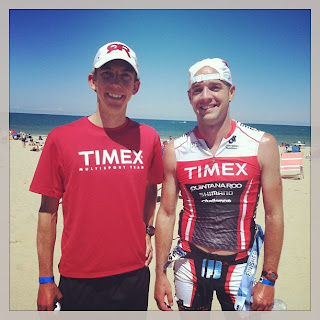