It was a long day, and I have some time in the plane home (from work, not the race...) so here comes a long report. So what had happened was......

Swim: The morning of the race I felt nervous but relaxed and ready to race. We got in the water, I warmed up the best I could in 5min, and we were off. I was on someone's feet for a couple of minutes, but then was feeling good and moved out, and all of the sudden was out front. I didn't really accelerate or anything, but started pulling away. From there I pretty much just swam the rest of the way at what I thought was a fast but controlled effort. Honestly, I was surprised to be out front, but hey, its a race! It certainly wasnt a goal, but it was definitely cool coming out of the water first! I just swam at what I thought was race pace, and thats what happened. It turns out I had about 40s on the next guy, after swimming 53:12. 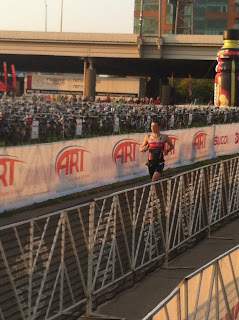 Bike: Out on the ride, I quickly settled into a rhythm and started downing the calories. Finally, Evoe, McDonald, and Gerlach caught and passed me around mile 30, and I let them go. I came through 50 in 2:12, which after doing some rough calculations made me think I was on pace for just under 5h, which is right what I was shooting for. 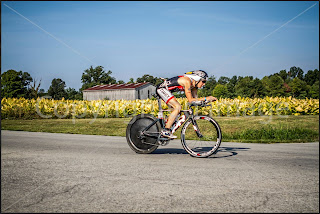 I missed mile 70, but a bit after that another guy passed me but not very fast, so I kept him in sight. Of course at this time the legs were starting to hurt and it was starting to warm up. I don't recall my split at 80mi, but I remember thinking I was still on pace. Soon after that, though, I heard a recurring thump in my rear wheel. I stopped and sure enough, there was a tack. I didnt worry about it because I wasnt far out of 4th and confident I could still catch the guy on the run that had just passed me. It took me about 6min to make the change. I was back on the road, but 5min or so later I could tell I was losing air. So, I stopped and got a CO2 and added some more air. I started back and soon after heard an explosion. My tire had torn and the strands that make up the lip were exposed. I wish I had a pic. So, without an extra tire, I had to wait for neutral support. Who carries an extra clincher tire?? I probably waited 30-35min. I finally got back into it, but the last 20miles were pretty brutal. I finally finished, and knew that although it would suck, I'd have to do the run. 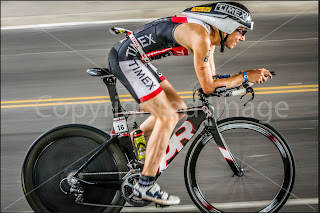 Run: Coming into T2, I still thought I could have a decent run. Why not? When I started running, though, it was a different story, as my stomach was cramping like a champ. It was so tight that I was having a hard time breathing, let alone getting any fluids down. I made it through the first couple miles around 7min pace, but it was a struggle. I kept expecting to feel better, but nothing was happening. So, I started walking through the aid stations hoping I could get some calories and fluid. Nothing seemed to help. I felt like I wanted to vomit, and I dry heaved a couple of times, but nothing came out. Finally with about 4 miles to go I decided I was going run the rest of the way, which I did. 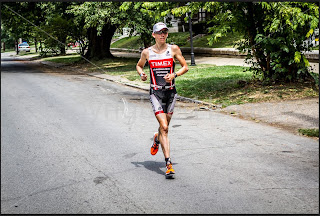 The last two miles were brutal, and I scored a trip to the med tent at the finish after almost falling on my face. I was dehydrated, but also bonking pretty bad, I think. I got a liter of fluid and drank ~8oz of chicken broth out of a straw, and my stomach finally started settling down. 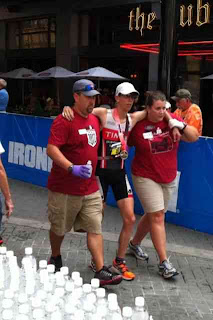 Obviously it was a pretty disappointing day, but that happens. What it means, though, is that I need some redemption! I'm not sure where or when it will come, but I'll figure that out in the next couple of weeks. In the meantime, its time for a little vacation weekend hiking with friends in the Smoky Mountains, which will be a nice mental and physical break, and should help me get over the disappointment of last weekend.

Dude.... you still beasted that thing. I'm so proud! What an experience! I'm glad you made it and had that rocket-fast swim!!