IMLOU - The Return of the Suck

So, where to start? As you'll recall, IM Louisville 2012 did not go so well. So, I returned this year partially in hopes of a better outcome, but also because I enjoyed the challenging course and awesome finish line.

Heading into the race my plan was to eat a lot on the bike, then try to finally have a decent run. I had to travel more than I wouldve liked in July and August, but never the less thought I'd still be able to improve on my abysmal IM running performances as long as I fueled well enough.

After a very brief dip in the water, the M and F PROs were off. The start was harder than I had remembered from the previous year, but I was more than happy to let others lead it out. After about 200M though, things settled down and I slowly moved up in the pack. Soon enough, though, I noticed I was up close to the front with the pace only slowing. There was another group slightly ahead on the right, but with a near 160 degree turn up ahead on the left, I had no desire to head right. So, I put in a little surge, and soon enough I was out front. By the turn at ~1300m, I was pretty sure I had a gap on the group. After the turn we got the current with us, so I just kept the buoys on my left shoulder and enjoyed a nice cruise to the finish. Back to back years as the first out of the water was pretty sweet, indeed. It was also pretty cool to see 48:XX on the clock when I exited. Yowza! 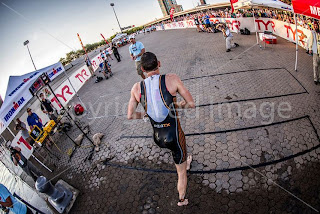 BIKE
Unlike last year, when it almost 30mi for the guys to reel me in, Chris MacDonald had caught me within the first few minutes this year. Apparently he was not satisfied to let Pat E ride away with the win, again. Either way, fine by me. As the guys continued to come by I was just focusing on doing my own thing, and trying to get as many calories down as possible. Thankfully, my Oatmeal Raisin and Chocolate PowerBars were tasting pretty dang good. 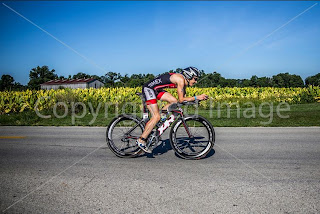 Without my PT, I was relying solely on splits on course. This is good in that time is really all that matters, but bad in that you really don't know if you should be going faster or not. My splits were a little slower than I had projected, but again, I wasnt sure if that was just because of the hilly course and poor conditions, or because I just wasnt pedaling hard enough.

Regardless, after the initial wave of guys passed me, I was out there all alone until the second loop on the "lollipop" where I came up on AGers on the loop #1. While overall I enjoy this course, this section is pretty sketchy. A narrow two lane road is open to traffic, and there are people riding three and four wide. The best parts were when I was passing a BRO just before an uphill, only for him to start CRUSHING it up the hill, only to have me pass him once it leveled out again. Despite numerous close calls, I did make it through lap #2 without any catastrophes. Heading back into town, I really just wanted to get off the bike.

After finally finishing up, it was out to the "run". IM runs are always interesting. I felt like death, as usual, in the first mile, but in reality it was a little under 7min. My next two were decent, as well, and I was finally starting to find some type of rhythm. Then, all of the sudden, it happened. The wheels started coming off, and by mile 5 I was seriously doubting whether I'd be able to finish. So already, by that point, I was just trying to keep running (rather than walking). This, by the way, is not a good thing when you still have 20 miles to go :-0. But, I kept running and eventually found a way to "run" 7:50/8:00 min pace, netting a split of 3:24. 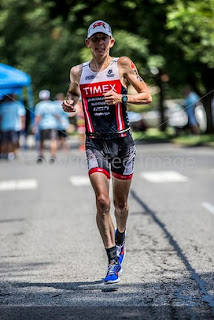 It wasnt exactly pretty, but at least it got me to the finish line 9h38min after the start. 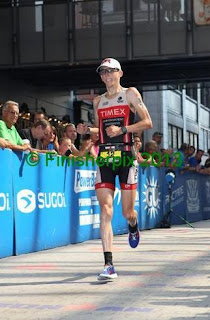 POSTMORTEM
So, another IM, another disappointing run split. I realize plenty of people would be really happy to go 9h38 on one of the toughest IM courses out there, but it is just really frustrating to me to see people I have beaten in 70.3s beating me my 20-30 minutes. I've come to the realization, though, that until I can put in at least 12-15h a week of very solid work on the bike, it will be difficult for me to go much faster on the run. In IM, running, it seems, is almost trivial if you dont have the bike miles in your legs.

On the bright side, this has reinvigorated my passion for racing 70.3s and Olympic distance racing, and I plan to go back to focusing on those for next year. I realize I dont have the time to put in the training necessary to be competitive at IMs, but can at the 70.3 distance. There really is a pretty big difference between 17h a week and 24-28h. As for this year... we'll see. Right now I'm just busy enjoying CFB!
Posted by Andrew at 8:52 PM