First of all, yes, I'm alive! Immediately after the race on Sunday I had to take off to catch a plane out of ATL at 7PM for Houston in order to provide technical insight at a meeting at JSC starting bright and early Monday morning. The meeting was to rewrite a NASA standard for the corrosion protection of space flight hardware. The old standard hadnt been updated in over 30 years, so we had a lot of work to do! After 4 long days, and some good debate, I'm finally back in Huntsville.

One other note before I get to the race. Timex Teammate and Serious BA Laura Tingle decided she wasnt racing but was still nice enough to head down to the Deep South and put up with my prerace nonsense for a couple of days, so she deserves a huge shout out for that. Thanks LT!

And now... to the race! Although it was unseasonably warm and marvelously sunny in the days preceding, Sunday morning greeted us with cool air and impending storms. There was some on and off precipitation while we warmed up, but it didnt bother me too much as I was pretty focused on the tasks at hand. After setting up the bike, I arrived at the start around 7AM for the 7:30 start time and began pulling on the wetsuit. Thinking back, I realized this would be the first wetsuit swim since Clearwater last year. This was due to the change in the rules for wetsuit temps, but more on that later...

Unlike last year when we got to dive off the floating dock, this year we had an in-water start. These are easier with a wetsuit, but I still find them a bit challenging. The gun went off and I got going pretty well but soon found myself losing a bit of ground. I maneuvered around a bit, moved past a couple of guys, and continued fighting for position. The field eventually strung out a bit, but I was still fighting for some feet pretty much throughout the swim. According to LT, there was more or less a string of guys out of the water for the first 40sec or so and although I was a bit further back than I wouldve liked, I was still very much in the race.

Out on the bike, I punched it hard. The guys that I needed to be riding with were right up the road, and I knew it was now or never to catch them. After 10min or so, I had caught up with a couple of guys and was committed to riding with them. Our group caught a couple of other riders, which made us 5 in total.

At this point I figured we were places 8-20 or so, but wasnt really sure how many were up the road.

The effort level varied with the hills but we were getting plenty of love from the head ref, so everyone was playing by the rules. Then, a bit before mile 20, we hit a series of long hills and Chris Legh decided to drop the hammer. This split the group up and I soon found myself being dropped off the back. Frustrated, I tried to accelerate up and over the next hill, but to no avail.

After losing the group, I just put my head down and focused on pushing as hard as I could on the pedals for the duration of the bike leg. The rain picked up and I actually started getting a bit chilly, which certainly didnt help the situation. Luckily we had a bit of a tailwind for the last 5 miles or so because at this point, pedaling was becoming quite difficult. 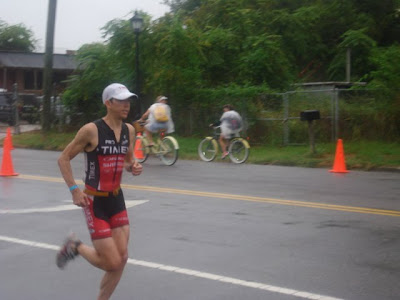 This course is incredibly spectator friendly which resulted in a nice crowd, despite the rain. So the spectators were great and my legs felt strong. The only problem was my feet, particularly my left one, where I was developing a pretty large blister on the bottom thanks to the rain and resulting we shoes. I put it out of mind, though, and just focused on relaxing and running fast. The last few miles were, as usual, pretty tough as I felt I was running pretty low on calories. I had to really focus on cadence during the last mile until I finally took the last right turn into the chute.

After crossing the finish, I started chatting with Justin Park, then all of the sudden my vision started to fade and I couldnt see anything, so that was fun. Thankfully I managed to stay on my feet until the dizzyness/loss of vision/lightheadedness passed. Upon regaining a sense of equilibrium, I had to jet in order to catch the aforementioned flight in Atlanta. I felt pretty bad about it but unfortunately airlines dont really care if you would prefer if the flight left a bit later; they tend to leave anyway.

However, before LT and I could head back to the car, I had to remove the racing flats because walking was quite difficult, thanks to the hole on the bottom of my foot: 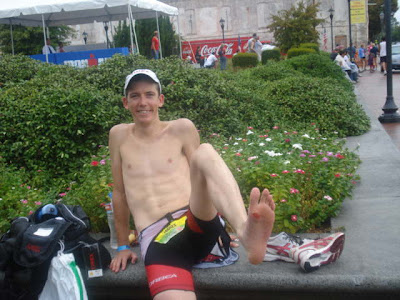 Somehow, the picture just doesnt do it justice.....

All in all, I cant really say I'm thrilled with the result. I'm content that I left it all out on the course, but the bottom line is I needed to ride at least 2:14 in the race, not 2:22. Getting there wont be easy but it will happen as the result of consistent, and I remain focused on making it happen. And hey, as my grad school professor said, "If it was easy, everyone would do it!"
Posted by Andrew at 9:03 AM