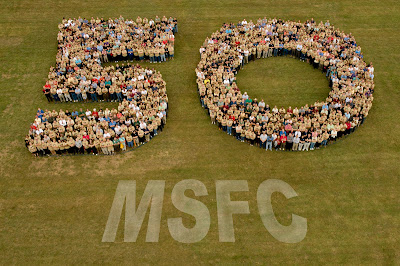 Yesterday, Sept 8th 2010, marked the 50th anniversary of MSFC. Back in the '50s, rocket development in the US was done by the Army and Navy at relatively low funding levels. However when the Russians launched Sputnik, the illusion of a technological gap between the US and the Soviets was created. As a result, NASA was formed on October 1, 1958. A little over a year later, the Army Ballistic Missile Agency was incorporated into NASA and a few months after that, President Eisenhower officially dedicated the "George C. Marshall Space Flight Center."

"Since its beginning in 1960, Marshall has provided the agency with mission-critical design, development and integration of the launch and space systems required for space operations, exploration, and scientific missions. Marshall's legacy in rocket science includes providing the rockets that powered Americans to the moon, developing the space shuttle propulsion system, and managing the development of Skylab, Spacelab, space station nodes, the Hubble Space Telescope, the Chandra X-ray Observatory, and many scientific instruments. "
Posted by Andrew at 10:33 AM