Ouch... triathlete alert! So I finally got a look at my pictures from the Mercedes Half Marathon and sure enough, I look like a total dork. Exhibit A was taken somewhere around mile 9, IIRC. 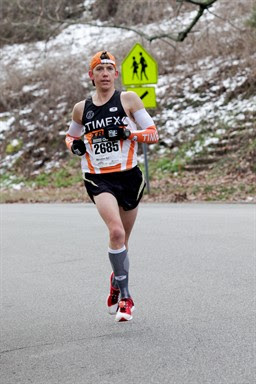 Surprisingly enough, in Exhibit B, taken 4 miles later just before the finish, I was still wearing the same apparel! 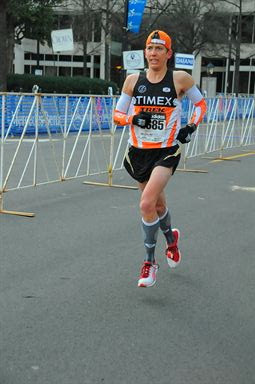 Now then, we'll have to dissect the ridiculousness one piece of apparel at a time. First, the arm warmers. Mr. Stover thinks running in a singlet and arm warmers is akin to running around in Newtons with an M-dot tattoo on your leg. However, note Exhibits C and D, Ryan Hall and Dathan Ritzenhein. Both are my age (coincidentally), both are very fast runners, and both have worn arm warmers and singlets recently in races. Additionally, neither of them run or swim. While I'll agree this is foolish in training, this is a very effective choice in racing as it enables you to stay warm without being constricted by a long sleeve shirt. Now, on to offense #2, the compression socks. The recent rise of compression socks has been well documented talk of a ban at Kona last year caused quite an uproar, leading to its reversal. I had never considered racing in them before, mainly because there was now way I was going to try to swim in them or try to put them on during a race. Furthermore, I actually enjoy running without socks in my racing flats, so I really saw no point.

However, this winter has been especially cold here in the southeast and there were a few weeks where I was doing everything I could to keep warm on runs. One of the solutions was to run start running in my Sugoi R+R Compression Socks. I really dont like cold weather and quickly found I could run in colder temps with them and shorts where otherwise I'd have to wear pants (I dont run in tights). I dont like to wear shorts under 40F so when the temperature at the start of the race was 30F, compression socks it was.

As a bonus, I have more photographic evidence that compression socks are, actually, OK to wear. Exhibit E: Simon Whitfield in Maui: 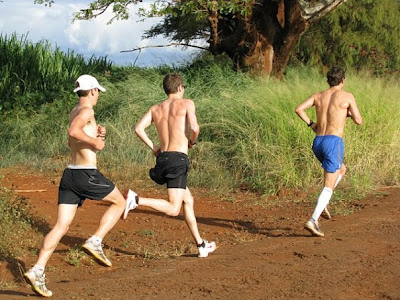 So the official verdict looks like: if you've been in the olympics, you can wear EITHER compression socks OR arm warmers, but not both.

Doode, How could you?