Two for one! So needless to say, things at the real job have been a bit busy, and the blogging is slipping. We've  got our first big milestone coming up (SRR/SDR), and I've had some artifacts due, and its kind of important we convince NASA we know what we're doing, so those have naturally taken priority. But dont worry, there has been some training as well...

First, a couple of weeks ago I went and ran a 5k at the National Cornbread Festival in S. Pittsburg, TN. Yes this is real, and yes it is awesome. The course was short (actually only 3mi) but quite hilly, so I was pleased with 15:30 for 3 miles and the win. 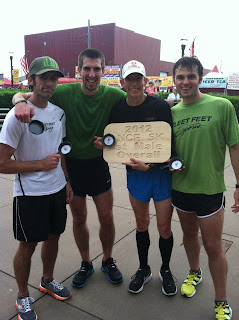 After that, it has been about a week and a half of really solid training. I've had some great threshold workouts on the track, and suffered through a couple of long rides on the QR. I also had a great workout with the kids.

Fridays have been LCM at the Nat so that the kids can get ready for the summer. This means, of course, that the kids also have practice in the morning those days. This particular Friday 16x100m, leaving on 2'30", best average. The kicker? These were from a dive, starting in heats. This was a great workout, and I definitely swam faster than I wouldve by myself. The only problem was that by the second half, my arms/back were getting so sore that I was having serious difficulty getting out of the pool...

So although New Orleans was more than a bit disappointing, I'm really looking forward to FL70.3. Not only have the workouts been going well, but I get to stay with my family, as my parents and sister still live in Orlando.

That festival sounds awesome! Oh and nice work on the 5k as well.