So I raced in New Orleans last Sunday. Or at least had the intention of racing a triathlon but ended up stumbling through a quasi-duathlon.

The New Orleans 70.3 turned into the New Orleans 67.1 when on Saturday the race director decided to cancel the swim due to the forecast of windy conditions on Sunday morning. Other than a few extreme situations (ie an impending hurricane) I'm not aware of a situation where the swim has been canceled that early. When it happens, it is usually a game-time decision. And even then there is usually quite a bit of consternation.

But, it is what it is and we were left with basically a bike-run event. After all, its not like there was going to be any real separation in two miles among 35 fit guys who have to ride 10m apart. I had a decent opening run, and was on my bike without any issues. That wouldn't last long, though, as things went downhill quickly.

The details are presented below in list form because I'm in specification writing mode. 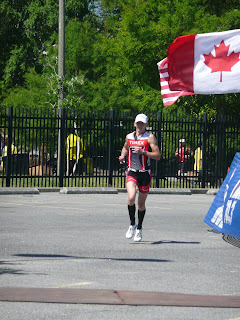 On the bright side, I did feel great on my new QR CD0.1 (when I was actually riding it) and felt good running as well (outside of the last couple of miles) so while last weekend didn't quite go as planned, I am looking forward to some solid racing in the near future. After all, might as well get all of the nonsense out of the way at once!
Posted by Andrew at 2:43 PM

Everybody has those races bro! When they cancel the swim like that, it just puts a damper on the whole event.