Another week, a few more VO2 workouts in the bag. Oh yeah, and then there was that race yesterday, the UAH 10k. I had 10k of faster running to do during the long run, anyway, so Saturday afternoon I pulled the trigger and signed up. This being spring in Huntsville, and the race being in the afternoon, there was a nice 15-20mph wind out of the N-NE which kept things interesting, if nothing else. So not wanting to give anyone a draft, I took off from the gun and ran pretty even splits, breaking the tape in first place in 33:52. Considering the hilly, windy course and the fatigue in my legs from the hard long ride the day before, I was pretty pleased with the result. 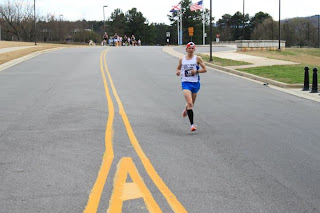 Unrelated to training, this race was awesome. I signed up the day before for three (3) dollars. I think day of race mayve been something unseemly like five or ten. On top of that, the race started at 2p! Now sure, there werent any t-shirts and the course was pretty boring, but there was RFID timing, water on the course, and bananas, muffins, doughnuts, peanuts, and other goodies afterward. But seriously.... $3! How awesome is that?!?!?!
Posted by Andrew at 11:25 AM

For $3 I'm in. Probably get my monies worth with just the post-race food ;)