Glad to have that one out of the way! That was probably the hardest week of the year thus far, but I'm still feeling pretty good coming out of it.

Friday I had a last minute change of plans and decided to head out to Decatur, AL to run a relay with some Fleet Feet Racing Team friends at the Delano 12h race. David R, Lisa R, and Lynn C had their 4th member back out at the last minute, so I agreed to fill in. The race is a 12h race, 6a to 6p on a one mile packed dirt/fine gravel loop, but I knew I'd only be good for a long run. So after David and Lisa each ran a few loops, I got going around 7:30a and ended running further and faster than planned. 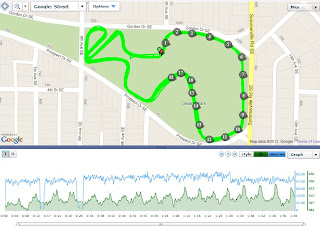 Although it sounds really boring, it was actually kind of fun. The surface was awesome, and it was great to have so many other people out there. Of course it also didnt hurt that the weather was picturesque. I ended up running 18mi w/ a 10mi progression run in the morning, then another 4 a few hours later for 22mi total. It was more than I had a planned, but nothing compared to most of the crazy people out there. For the day, our team finished with 95mi, a not-so-close second to the stacked team of George H, Tim V, Erik D, and Brad S, who had 117(!) 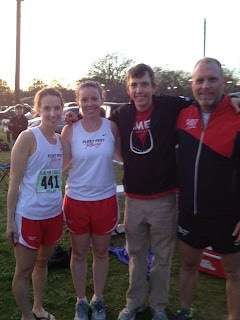 So basically it was a day of running and hanging out with friends. All in all not a bad way to spend a Saturday.