Heading into the race I wasnt expecting much, as I was coming off an injury and had just started a new job. So the race report will come but the real reason for the trip was to meet up with some friends and family.  My sister, Katie, her roommate, Walker, and their friend, Mike, drove up from Orlando, while my friend, Hunter (who also happens to be Walker's brother), made a surprise visit from Houston.  Even more of a surprise was Hunter's entrance into the race, as he is most definitely not a runner... not yet, anyway.

But here he was, ready to travel 13 miles by foot!

The race started in the dark at 7AM. Thankfully the first few miles wove through the relatively well-lit campus of the University of Georgia.  Although not being able to see the road was mildly disconcerting, it was probably just as well that I couldnt see the ubiquitous 'G' everywhere, as that certainly wouldve enticed fury if not projectile vomiting.  By about the third mile, two guys had moved up the road and I was running with two others.  Although we were still in the early stages of the race, this course was hilly.  The relentless changes in elevation made splits a bit of moot point, so I simply tried to stay focused on a good tempo and stick with the guys around me.  I did until a bit before mile 7 when they started slowly pulling away during a long uphill stretch.  I kept them in sight for the next few scenic miles, but couldnt seem to close the gap.  Mile 11 contained a brutally steep downhill during which I lost a bit more time, but then just couldnt get my legs moving any faster on the mostly flat 12th mile.  The last, then, was all uphill and simply survival mode... one of those "just keep moving forward so you dont roll backwards" type situations.  I finally made it across the finish line (which, incidentally, was noticeably higher in elevation than the start) in 1:15:59 and 5th place.

Considering the difficulty of the course, I wasnt too upset with the time, as it is certainly a step in the right direction compared with where I was a month ago. Meanwhile, Hunter and Walker both finished, and even were in good enough spirits to enjoy a couple of spirits courtesy of America's Oldest Brewery after the race. 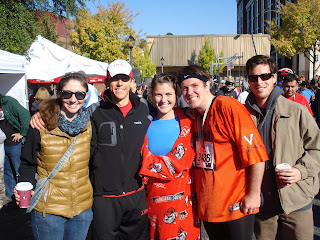