Indications of a bizzare day were evident almost from the start.  Heading W (actually S) on I-4 from downtown Orlando towards Disney, Mark Vermeersch and I noticed flashes of lightning streaking across the sky off in the distance. Lightning is of course nothing new for Central Florida, undoubtedly the lightning capitol of the US (Rawanda, Africa tops it in the World listings for most strikes).  However, it is rare to see an aerial display in the morning, as most lightning is associated with thunderstorms that run across the state in the afternoon. Regardless, certainly not a normal occurance for the start of a race.

Upon arriving at Walt Disney World, lightning was still flashing pretty regularly but thankfully the rain was holding off.  Sure enough, though, the rain commenced by the time we reached transition.  Rain happens, but again, not usually in the morning, and not during any of the previous editions of the race. Despite the weather situation, though, the announcer continued informing us that the radar indicated the weather would clear and we should be ready for our regularly scheduled 6:20 AM start time. So I continued warming up, kept remarkably dry by my Timex Multisport Team Zorrel Whistler Jacket.  This thing looks sharp, is comfortable, and as a bonus repelled the water incredibly well.  Before I knew it, 6AM rolled around and I was heading out of transition and down to the swim start.

Once on the beach, the announcement was made that the race would be delayed 20 minutes.  This, I thought, was reasonable as the rain and lightning had finally stopped and the sky did appear to be clearing.  Of course this meant 20 more minutes of nervousness and a 6:40 start rather than the usual 6:20 start.  A little warm up in the water would've been appreciated, but it was too dark for that.  (Thus the perils of starting a race before sunrise...)

Finally the gun was off and the madness ensued. On approximately my 4th stride, my foot landed on a sharp object and I felt a slicing pain under my left big toe. It hurt, but I could still feel the toe, so I figured I'd survive. Coming into the first turn buoy, I was in a group with 3 other guys but was a bit worried that I was too far back.  I felt like our pace was strong, but it also looked like there were some others pretty far ahead. The water was choppier than it had been in previous versions of the race, so I was pleasantly surprised to be out of the water around 26:40.

Running through the long chute to the transition area, I looked down at my foot and sure enough, it was covered with blood.  I couldnt exactly do anything about it, so I proceeded to my beautiful Ordu and took off, hoping it wouldnt hurt too bad the rest of the race. I still wasnt sure of my position, but I did notice quite a few more bikes remaining on the pro men's rack than spots vacated, so that was a good sign.

Once I got moving on the bike I looked down at my PowerTap only to find that the computer was not picking up my wheel.  This was bad news. My coach, Paulo, had given me strict instructions for the ride, so I knew he'd be upset if I didnt have any data.  I tried remounting the computer and adjusting the wheel sensor, but nothing seemed to work. Without data, I just focused on riding hard and keeping people in sight.  I was passed by a couple of people early on, but also passed a couple of riders, so I hoped I was riding well.  Without a working computer, I wanted to keep my 5-mile splits right around 12 min. I did, for the most part, with a few under 12 and all under 12:30.  This left me confident that I was cruising towards a decent bike split.

Finally the bike was over, and I was off on the run.  Up to this point, the day had been one of unfamiliar occurrences, but the run was eerily similar to years past.  The theme for this race goes something like this: run fast while you can, and then hang on.  Florida in May is hot and humid, and sooner or later the heat will take its toll at which point you just have to fight as best you can to maintain whatever pace you can.

I believe I was around 12th or 13th coming off the bike, but after a strong first lap I was being told I was in the hunt for top 10.  The multiple out-and-backs allowed plenty of opportunity for the hunters to see their prey, and I was on the prowl.  I had moved into the top 10 by the start of the last lap when I was informed that Kevin Collington was about a minute up the road, so I was hoping I could reel him in as well.  By this time, though, the heat was really starting to take its toll and my 5:55s fell to 6:15-6:30.  Nevertheless, I caught him with 2 miles to go and he told me 8th place was "fading fast."  Once I got back out onto the asphalt, I just focused on keeping the tempo up as much as possible in order to maintain some semblance of a reasonable pace.  Finally, I moved into 8th with about a mile to go, and just wanted to cruise to the finish.  However, a few moments later I noticed a hard charging Brent Poulsen was closing rather quickly and I sure as hell was not about to get passed in the last half mile after racing for over 4 hours! So I redoubled my focus on turnover in an attempt to increase speed, as I was determined to hold him off.  Finally, I reached the barriers and hit the left turn for the chute. I started to think I was in clear when I heard someone say, rather nonchalantly,

"Nice job, almost there. You've got a guy coming up behind you"

Not exactly what I wanted to hear!  I went into HS CC mode and began "sprinting." I was thoroughly wiped at this point, so I felt like I looked like a actor who is obiviously not a runner trying to run in a movie. All of his motions are exagerated, but he really not moving that fast at all.  So that was me... trying to sprint, but not really moving that fast. At that point, though, it was all I had. Indisputable photographic evidence, courtesy of Katie Hodges: 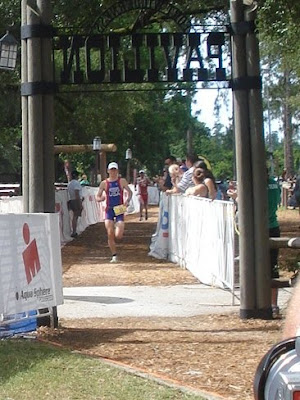 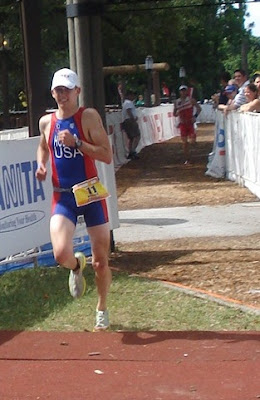 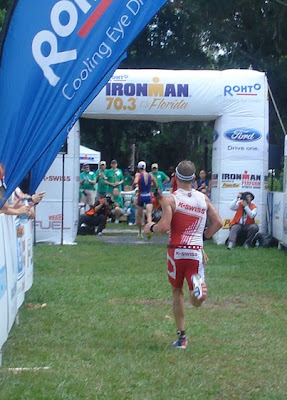 I crossed the timing mat and then continued through the banner before halting and hunching over to place my hands on my knees. A couple seconds later, there was Brent.  Although I had quite a few minutes of not being able to see anything, I did manage to stay upright and prevent collapse.

In review, my swim start couldve been better, I was pleased with the bike ride, and I couldve used a little more at the end of the run. But there are always things to improve and I was happy with my effort in the first race of the season. Most of all, it was great to see my family and hang out with my Timex teammates. 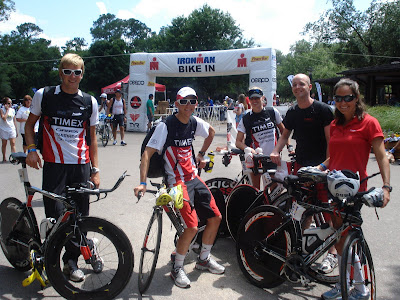 Great Job on the race. I'm sure if felt good to get back in the swing of things!! Congrats.

nice write up! so what kind of power were you supposed to stick to before realizing you couldn't pick up your PT wheel?

Thanks Brent. Too bad about the bike, but great run!