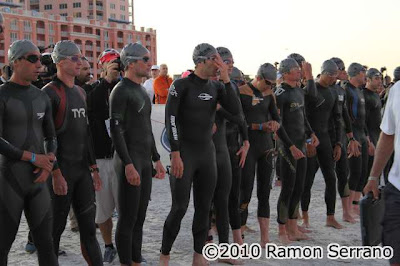 Rule 6: Travel in a group
BOOM!!! Goes the cannon, and we were off the beach and sprinting into the Gulf of Mexico. As soon as we started swimming, it was apparent that zombies were out in the ocean, as the Gulf's usually serene waters were replaced by a zombie generated wave pool. I tripped a bit on the run in which left me to play catch up early, requiring a really hard effort for the first 400m or so. Eventually I found a group and just hoped we weren't too far back from the leaders. The conditions made it difficult to determine how many people were "up the water", but I was swimming hard and in no place to escape our decent sized group.

Exiting the water, I recognized a couple of faces and heard a couple more names of guys coming out behind me, so I was pretty happy to have escaped water zombies in relatively good position. My focus immediately turned to T1, which I knew would be crucial. 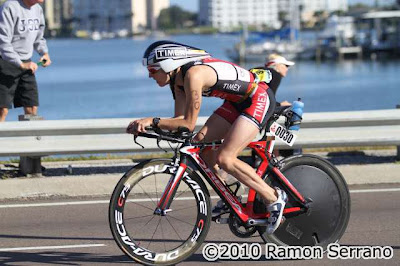 Rule 17: Dont be a hero
Out onto the bike and what do you know... more zombies, this time in the form of a stiff wind out of the East. After the first few minutes, I was grouped with a few others when we made a turn onto a longish straight road heading east towards the main out and back section of the course. Up the road I could see another largish group and my first instinct was to chase. However, my Zombieland training kicked in and I reconsidered. Dont be a hero. Due to the straight road, the pack was likely further than they looked. Additionally, I was already riding moderately hard at the back of our little group and we were heading into a headwind. Passing the group and then chasing the others down would've been a sure ticket to zombie cannibalization, especially at the beginning of the 56 mile ride.

Rule 8: Kill with Efficiency
With that key tactical decision out of the way, I focused on staying with my friends and keeping the pace honest. This was especially challenging with the course traversing primarily north and south, leaving us with a day full of zombie crosswinds. Thankfully my Shimano C75 wheel was more than up to the task, annihilating wind zombies left and right.

Rule 22: Be Ruthless
Coming to the end of the ride, my leg/butt was feeling really tight so I was looking forward to getting off the bike. After gaffed transitions last year, I was really focused on good transitions this year. Towards the end of the ride I moved to the front of the group, jumped off my bike, grabbed my bag, threw on my shoes, and headed out on the run in no time. At this point, it was time to Be Ruthless. I had been waiting to attack, and now was the time to go in for the kill-shot. I took off out of T2 and after a minute of stumbling, found my stride. First mile: 5:36. The early mission of zapping my biking companions was effective. Now: to pick up some more scalps. I notched a couple more on the first lap but as I headed for the turnaround to start lap 2, I realized there was only open real estate in front of me.

Rule 32: Enjoy the Little Things
At this point, with my place more or less set, I focused on keeping my turnover up and enjoying the day. I made it over that stupid bridge for the last time and cruised in, soaking up the crowd support from awesome Timex teammates, friends, family, and the plethora of others who were out cheering.

Rule 1: Cardio.
In the end, it still all comes down to fitness. You can make the correct tactical decisions during a race, but if you dont have the fitness to execute them, they are useless.
Posted by Andrew at 7:53 AM

Good job and what a fun and creative report. Wow on the run time!!!