Saturday morning I raced in the hometown race, the Huntsville Sprint Triathlon, a low key race with a lot of beginners. Starting with a three mile run on a hilly cross country course, followed by a short six mile bike, and concluding with a 400m pool swim, this is a pretty unique race. Although the race is short, the order makes it particularly painful.

My day got off to a rocky start as my front carbon clincher Bontrager Aeolus 6.5 was flat when I tried to inflate it. No worries; I was home and had plenty of spare tubes. After a quick change, I inflated the new tube and thought I was ready to roll. All of the sudden, I heard a loud “BANG!” signally another flat on the tube I had just inflated. “Stupid biking!” I thought. Sick of screwing with tubes and tires, I swapped my race wheel for my training wheel and was finally ready to go.

Arriving at the race, I set up my transition before taking off on a warm up jog. Incidentally, for this race, “setting up my transition” consisted of laying my bike on the ground as there aren’t any bike racks. The of course really just adds to the low key, grass roots feel of the race.

Standing at the starting line, I knew I’d be in for a tough race if I wanted to be the first person across the line. A couple of my training buddies put together a relay team which the race director aptly named, “Beat Hodges.” Considering the fact that the three of them, in the individual sports in which they were competing, can handle me pretty easily, I knew I was pretty much SOL seeing that they’d be fresh for their respective legs and I’d have to do all three.

As the gun went off, David R, my training partner and runner for the “Beat Hodges” team, took off. Behind him a pack of three or four quickly formed which I was a part of. After about half a mile and with the initial sprint wearing off, I moved to the front of our pack to maintain the pace. By the half way point, I had maybe a 5-10 sec cushion over the next guy behind me so I just kept the same effort level through to the finish. Rounding the last turn, I could see David finishing in a bit under 16 minutes. That was the last I saw of team “Beat Hodges.” By the time I crossed the line, the clock was right around 17 and Craig A, their biker, was long gone.

The ride was, as usual, painful. I spent the first half searching for my biking legs after the run but once they finally appeared, I only had a couple of miles left. No complaints here though… the shorter the bike the better!

Off the bike and into the pool, I was feeling pretty good about the win. My main focus was to get my breathing under control and make good flip turns under the lane ropes, as last year I popped up right underneath a few. I had a nice smooth swim and that was that; the race was seemingly over as soon as it had started. 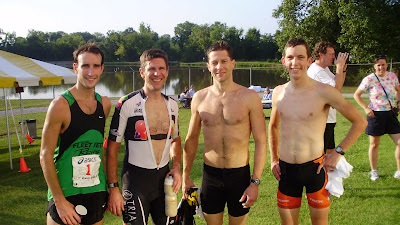 Team "Beat Hodges" (David R, Craig A, and John K) and me
After the race it was great to hang out with friends and see so many first time finishers. Although the race was relatively short for me, for a lot of people this was their first experience with triathlon and it was really cool to see them finish. The weather was awesome and everyone I talked to had a great time so hopefully the race can get bigger in years to come.
Posted by Andrew at 1:45 PM