So that happened. Or not, really.

Heading into this race I felt pretty good, as I had had some solid long rides, and was looking forward to some great weather in PCB. I also had plenty of friends and family at the race, so that was an added bonus.

Without further ado, lets get to the action. The gun sounded and we were off into the Gulf. There were some swells, which made sighting difficult at times, but nothing too terribly bad. The group seemed to split pretty quickly, and soon I found myself swimming alone. I wasnt too worried, though, because I really dont think there is much of an advantage to drafting in the water with the swells as big as they were anyway. The first lap was fine, and I was pleasantly surprised to see 25:xx when I came out of the water the first time. 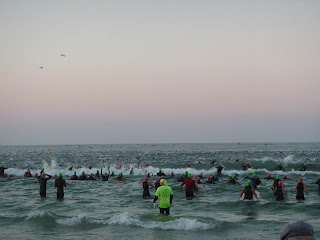 A few minutes after 7a, courtesy of Beth N

Across the beach to start lap #2 and all was still well. Coming back on the second lap, though, things got a little dicey, as it was about this time I started swimming through quite a few AGers. The concentration only increased, and pretty soon it was Normandy out there. As I came out of the water, I saw a 53:xx (swim split was 53:30) and feeling great; definitely ready to attack the bike. 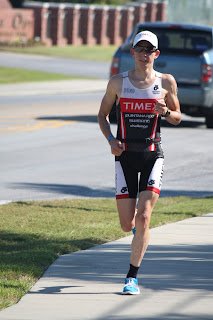 Mile 6ish, courtesy of Beth B

During this time, my form started falling apart, and it was everything I could do to keep running the pace I was. Then going into the park, there was a little section of plywood which I caught the edge of, tripped, and felt a little something in my Achilles  This forced me to stop and walk, and it was a slow walk at that. I tried to run again, but no dice. So, rather than limping another 2h to the finish, I got a ride to the med tent for an IV and some desperately needed calories.

Obviously the whole thing was pretty frustrating. Well, not the whole thing. The swim and bike went well, and I was shuffling along just fine on the run through about 10 miles. But none of that really mattered when I  blew up like a CHAMPION. Looking back, I probably should've targeted more calories on the bike and the run. I took all that I had planned, but clearly that just wasn't enough. I also need to practice taking calories on the run more, and getting used to running with a flask. I'm bad at drinking out of cups while running, so I think bringing a little bottle along could go a long way.

I'll do another post to wrap up of the season, but going forward, clearly I'm going to need to do at least one more of these crazy races. I think its safe to say that I've been humbled a bit my the distance, as bonking hard core is not fun. So, if I'm going to want to actually do well, I'm going to have to take more calories throughout the race. If nothing else, my experience last weekend should do a pretty good job scaring me into that!
Posted by Andrew at 7:18 PM

Keep up the hard work. The distance is certainly different and part of the fun is figuring it out. You will get there. No worries.