Spooktacular 5k and a little triathlon...

So yeah... things have been a bit quiet around here. But, thats what happens when your are training for an IM and getting ready for a PDR at the same time.

That's right, another IM; I'm racing IMFL this weekend. But last Saturday was the annual Huntsville World Championships, aka the Spooktacular 5k. I dont get to race too many 5ks, so it was fun to get out there and mix it up. 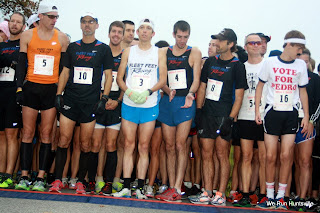 I ran 16:18 on a cold, windy day for 2nd, and felt pretty good doing it. I certainly wasn't super sharp, but it wasn't too hard of an effort, and I felt OK the next day, so I was perfectly content with how it went. The temperature just took a huge drop here in the 'ville, so I was definitely happy to be out running fast rather than on my bike for 5h.

Speaking of being on the bike for obnoxiously long periods of time, the last 6 weeks or so have consisted of some pretty solid training, so hopefully that will be evident this weekend. Since IMLou I've had 3 rides >5h plus a century plus a 56mi TT that was ~5W higher than I've ever done in a half IM. And of course outside of the century it has been all solo, all the time. So even the relative loneliness that I typically encounter after the first 30mi should feel like a crowded chicken coop.

And as for the run? Well, this is IM, and we all know that just comes down to how well you consume calories and pace on the bike. So, if I do both of those well, I think I'll do just fine. Plus, my running buddy George H is training for the Rocket City Marathon, so he's been more than keeping me honest during the long runs.