Who says you cant have any fun while training for an IM? Saturday some friends were planning on going out to the river for some fun, so I certainly wanted to join. The only problem, of course, is that I have this little race coming up in about a month, so I needed to spend some time on my bicycle. So clearly the solution was to simply ride to the river. But, because the destination was only about 40 miles away, and I kind of needed a detour via Tennessee: 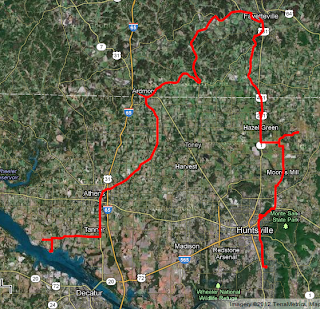 I was pleasantly surprised with the route, especially Route 273 and 274 up in TN. The trek from Ardmore, AL to Athens on Al 251, on the other hand, was not so much fun. Then the last 8mi on Nuclear Plant Road, was just awful. Rough pavement and huge bumps just arent the way you want to finish 5h+ in the saddle!

Regardless, 5h 21min and 112miles later, I was finally there. Just a quick 20min run and I was ready for a great afternoon on the river.

At that point the fun was just starting, as the next destination was Tanner High School for a tractor pull! 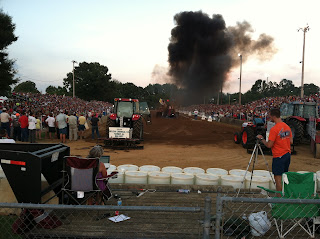 Yes, those are thousands of people in the stands who paid $15 to watch modified tractors pull trailers loaded down with weight. Cant beat it!